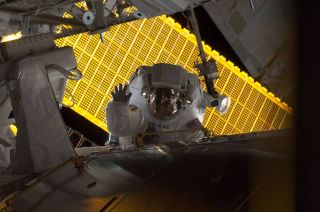 Twoastronauts will float outside the International Space Station for a spacewalkThursday evening secure in the knowledge that their spacecraft won?t have tododge a massive piece of space junk.

MissionControl initially told the astronauts last night to try to begin Thursday?sspacewalk early so they could get back inside in time to movethe space station clear of the approaching debris.

But furtheranalysis found that the maneuver will be unnecessary since the space junk willpose no risk to the space station and shuttle when it zooms by Friday morning.

?It?s arelatively large, easy to track object,? said station flight director RoyceRenfrew in a mission update. ?The probability of the two objects comingtogether in space is zero, so we stood down on that.?

The spacejunk is a massive piece of a European Ariane 5 rocket that launched twosatellites into space in 2006. It will make its closest approach to the linkedshuttle and station early Friday at about 10:06 a.m. EDT (1406 GMT).

The derelictrocket trash is about 204 square feet (19 square meters) in area and is flyingin an extremely elliptical orbit that reaches nearly 20,000 miles (32,000 km)at its high point.

While NASAtracked the space junk overnight, shuttle astronauts Danny Olivas and ChristerFuglesang prepared for their Thursdayevening spacewalk. Mission Control radioed the astronauts around mid-day tolet them know the space debris was of no concern.

?Well that?sgreat news and we can focus on the [spacewalk] today,? Discovery commander RickSturckow replied.

Theastronauts are scheduled to climb into their NASA-issue spacesuits and floatoutside the space station at about 5:19 p.m. EDT (2119 GMT) to install amassive new ammonia coolant tank during the 6 1/2-hour spacewalk.

The tankweighs just over 1,700 pounds (772 kg), and while it floats in weightlessnessthe astronauts will still have to take great care because of its hefty mass.Astronauts removed an old ammonia tank and stored it at the tip of thestation?s robotic arm on Tuesday.

?Not only therobotic arm will have its hands full, I will also have my hands full,?Fuglesang said in a NASA interview. ?So it will be, I think, pretty spectacular?. I think there can be some good photos.?

Thursday?sspacewalk will be the fourth career excursion for both Olivas and Fuglesang,who is a Swedish astronaut representing the European Space Agency.