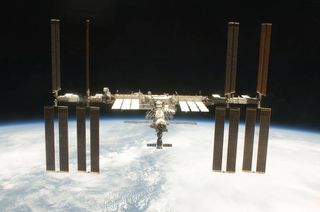 The International Space Station as it is today. This image was taken in July 2009 by departing astronauts on the space shuttle Endeavour after they undocked from the outpost during the STS-127 mission.
(Image: © NASA.)

NASA is tracking a large chunk of rocket trash hurtling through space just in case it might require the linked shuttle Discovery and International Space Station to move out of the way late Thursday.

The space junk, an old piece of a spent European rocket body, is expected to zoom past the space station and Discovery on Friday and make its closest approach just after 11 a.m. EDT (1500 GMT).

It could come as close as 2 miles (3 km), about five miles closer than previous estimates, of the spacecraft, said John McCullough, NASA's flight director office chief.

McCullough told reporters that, as of late Wednesday, NASA is confident the station-shuttle complex won't have to dodge the object, which is a derelict chunk of an Ariane 5 rocket. But Mission Control will keep an eye on it to be safe.

NASA officials are unsure of the exact dimensions of the space debris, but said it is part of a rocket that launched in August 2006 to send two communications satellites into orbit.

It is relatively massive by space junk standards, about 204 square feet (19 square meters) in area, and flying in an extremely elliptical orbit that reaches nearly 20,000 miles (32,000 km) at its high point, making it hard to track. A decision on whether or not to move the space station and Discovery is not expected until Thursday, but will not affect plans for an evening spacewalk by two shuttle astronauts, McCullough said.

Mission Control radioed Discovery commander Rick Sturckow Wednesday afternoon to say that if a maneuver is required, it would be performed after a planned spacewalk Thursday. Engineers discarded a third option to lower the shuttle-station complex, which would have delayed Thursday's spacewalk to Friday.

Space debris has been a growing concern for the space station, shuttle missions and other satellites in low-Earth orbit since the Feb. 10 crash of an American communications satellite and a defunct Russian satellite. The orbital collision created two clouds of debris that have increased the risk to the space station and docked shuttles by about 6 percent to a 1-in-318 chance of a hit, NASA officials have said.

A leak in one of the small thrusters aboard Discovery has forced NASA to keep the shuttle's small reaction control jets off-line. The larger thrusters are more powerful and engineers worked diligently earlier this week to make sure Discovery can fire those jets safely while attached to the space station.

News of the space junk did not hinder work aboard the shuttle and space station.

The astronauts spent Wednesday moving new science experiment racks, each the size of a refrigerator, into the space station from a cargo pod delivered by Discovery earlier this week. They also hooked up a new astronaut bedroom, also delivered on the shuttle, in the station's Japanese Kibo lab.

Shuttle astronauts and Mexican-Americans Danny Olivas and Jose Hernandez, a former migrant farm worker who dreamed of reaching space, took time to answer questions in English and Spanish from people and reporters on Earth.

In Spanish, Hernandez told reporters in Mexico that the country looks stunning from space and he has been able to see his parents' home state of Michoacán during the day and the blazing lights of Mexico City at night.

"I think that it's very beautiful," Hernandez said.

Discovery's crew is in the middle of a 13-day mission to deliver new science gear, supplies and a treadmill named after Stephen Colbert to the International Space Station. Three spacewalks are planned for the mission, one of which was performed late Tuesday.

Mission Control told Discovery's crew to prepare for Thursday's spacewalk as planned. The spacewalk will be performed by NASA astronaut Danny Olivas and Swedish spaceflyer Christer Fuglesang, and will be primarily aimed at installing a new ammonia tank for the space station's cooling system.