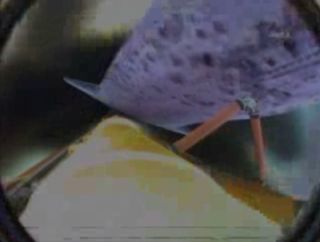 The fragile heat shield of the space shuttle Discovery is seen in this view from a camera mounted to its external fuel tank as the two separate following a successful Aug. 28, 2009 launch into orbit on STS-128.
(Image: © NASA TV.)

Shuttlecommander Rick Sturckow and his crew used a sensor-tipped pole attached toDiscovery?s robotic arm to conduct the six-hour survey of heat shield panelslining the shuttle?swing edges and nose cap. The inspection has been a standard chore forastronauts since the 2003 Columbia disaster to seek out any damage caused byfuel tank debris during the launch into orbit.

?It?s athorough process that we go through and we have a lot of confidence now that wecan determine any damage that the shuttle might have,? said Discovery astronautPatrick Forrester, lead shuttle arm operator for the flight, in a NASAinterview.

Theinspection was expected to last most of the night. Discovery is due to dock atthe space station late Sunday at 9:03 p.m. EDT (0103 Aug. 31 GMT).

Shuttle flightdirector Tony Ceccacci said that, so far, Discovery appears to be in fine shapesince its midnight launch Friday. A blown fuse at a communications station inNew Mexico did delay some of the survey data from reaching Mission Control, butwas fixed promptly, he added.

Discoverylifted off late Friday from NASA?s Kennedy Space Center in Florida at 11:59p.m. EDT (0359 Aug. 29 GMT) to begin a 13-day resupply flight to theInternational Space Station. Because the shuttle launchedat night, Discovery astronauts were unable to photograph their foam-coveredexternal fuel tank as it separated from the shuttle once the spacecraft reachedorbit.

Sturckow,however, did fire Discovery?s thrusters to guide the shuttle over the 15-storyfuel tank so a belly-mounted digital camera equipped with a flash couldphotograph it. Those images were beamed back to NASA?s Mission Control inHouston a few hours after launch.

?It?s greatto be back in space,? Sturckow, who is making his fourth spaceflight, toldMission Control Saturday.

NASAanalysts will review the video, as well as radar data and imagery in moredetail to be sure, he added.

Since then,NASA developed new heat shield inspection methods and repair tools for shuttlemissions. Shuttle astronautsnow routinely inspect their spacecraft heat shields twice, once after launchand again before landing, to make sure their vehicles are in good health.Astronauts aboard the International Space Station also take photographicsurveys of incoming shuttles just before docking as another safety measure.

The dataand imagery from all of those surveys are exhaustively reviewed by engineers andanalysts on Earth to be sure a shuttle is fit to return home.

Tonight,Discovery?s six-man, one-woman crew will also check the spacesuits to be usedduring the three excursions planned during the shuttle?s time at theInternational Space Station. Discovery is delivering a new crewmember and acargo pod packed with about 15,200 pounds (6,894 kg) of science equipment andfresh supplies.

The shuttleis also delivering a new space treadmill named after televisioncomedian Stephen Colbert, who won an online NASA poll to have a new stationroom named after him but got the exercise gear instead as a consolation prize.

So far, theonly glitch that has popped up on Discovery is the failure of one of two smallforward thrusters on the shuttle?s nose. Engineers believe a leaky fuel valvecaused the failure and shut down the manifold controlling both thrusters forthe duration of Discovery?s 13-day flight. Discovery has six of the smallthrusters, two forward and four aft, and 44 thrusters in all.

The glitchshould not impact Discovery?s mission other than requiring astronauts to use abit more propellant during other shuttle thruster firings, as well as rely moreon Russian thrusters on the space station for attitude control once bothspacecraft are docked, NASA officials said.