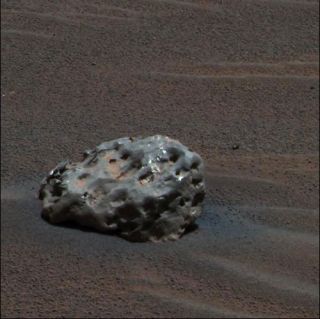 Iron Meteorite on Mars, the first meteorite of any type ever identified on another planet. The pitted, basketball-size object is mostly made of iron and nickel. Readings from spectrometers on the Opportunity rover determined that composition. Opportunity used its panoramic camera to take the images used in this approximately true-color composite on the rover's 339th martian day, or sol on January 6, 2005. Image
(Image: © NASA/JPL/Cornell)

The discovery of an iron meteorite sitting on Mars by NASA's Opportunity rover has kick-started a wide-ranging discussion as to what the find may be telling us about the planet itself, past water conditions there, and just how peppered the red planet might be with the fallen objects.

Roughly the size of a basketball, the object is mostly made of iron and nickel, and is the first meteorite of any type ever identified on another planet.

Once scientists here on Earth spotted the odd-looking rock, the Opportunity rover was wheeled into position. The robot was then commanded to utilize a suite of science instruments to survey the meteorite.

How does the finding of the meteorite scale given all the Mars rover science accumulated to date?

"Finding one meteorite is surprising and interesting, but not by itself what I'd call one of our most important discoveries," responded Steve Squyres of Cornell University in Ithaca, New York and principal investigator for the science instruments on both Opportunity and Spirit, its sister ship also busy at work but on the other side of Mars.

"The important thing, I think, is that this now opens up a whole new line of inquiry for us," Squyres said, calling attention to several questions, such as: How common are meteorites at Meridiani? What does the concentration of meteorites tell us about erosion rates on the plains?

"We've seen lots of little rocks on the plains, but with this one exception -- and Bounce Rock -- we've never stopped to look at one," Squyres told SPACE.com.

In April of last year, the rover studied "Bounce Rock", an odd, football-sized object that Opportunity struck while bouncing to a stop inside protective airbags on landing day over a year ago. Scientists noted at the time that the rock's elemental composition was unlike anything seen on Mars before, with similarities to a meteorite tagged EETA79001 that was found in Antarctica in 1979.

"So what fraction of the rocks on the plains are meteorites? We haven't really thought much about meteorites until now, but this discovery has really opened our eyes to the question. As we work to answer it, we may learn quite a bit about the long-term history of the plains," Squyres said.

Other scientists contacted by SPACE.com offered their thoughts on the meteorite find.

An iron meteorite being found on Mars would be "a truly remarkable discovery," said Carl Agee, Director of the Institute of Meteoritics in the Department of Earth and Planetary Sciences at the University of New Mexico, Albuquerque, New Mexico.

"Here at the Institute," Agee said, "we're always a little skeptical about 'dense black rocks' until some careful examination and analyses have been done. On the other hand, we're finding many meteorites in the deserts of Earth, so why not on Mars?"

Agee pointed out that running across the first "hand sample" meteorite on another planetary body would be a first. Some pieces of meteorites have been found on the Moon, tiny fragments of meteoric material mixed up with the regolith in the lunar drill cores. "The cores also have tiny mineral grains...that may be from meteorites or interplanetary dust."

But those tiny fragments are just that compared to the type of meteorite finds being made in Antarctica, and the hot deserts...and now on distant Mars. "These are hand sample-sized objects," Agee said.

"The fact that a robot found it is even more astounding, since a human walking on Mars would probably be much better at spotting meteorites in a landscape. We know this from the Antarctica experience," Agee explained, pointing to the on-going treks to that part of our planet and the concentrations of meteorites found there.

"The meteorite flux and the cratering rate on Mars is also a very interesting problem. Perhaps the flux is higher than we thought and thus meteorites are more abundant. This would have an effect on assumed cratering rates which are used to calibrate the martian geologic time scale," Agee said.

If this is an iron meteorite found by Opportunity, then it seems to have survived the oxidizing surface environment of Mars by not rusting away yet, Agee noted. "This may mean that it has been sitting on the surface for a short length of time, either because it was buried and is now being exposed by erosion or it fell to Mars recently."

Clark Chapman, a planetary scientist at Southwest Research Institute in Boulder, Colorado, said he was very skeptical when first hearing about the meteorite on Mars.

"On the Earth, after all, even in most favored locations, a lot of people can cover an awful lot of ground before finding a meteorite. While Mars is a less 'active' world than Earth, it has sand dunes and dust storms...a lot going on," Chapman said. "And Spirit and Opportunity, amazing though they are, are surveying very small regions very slowly."

Chapman said the meteorite finding is a lesson learned.

"As often happens with theoretical expectations, solid experimental and observational reality has intruded. No doubt it will spur people to think more carefully about how common meteorites might be on the surface of Mars," Chapman said. "Maybe this is a fluke. But, more likely, we will learn something about Martian surface processes as a result of this unexpected discovery."

Coming across a meteorite on Mars that is apparently iron in composition "is pretty amazing, but is consistent with Opportunity's luck...lands in a little crater with fascinating rocks exposed...then finds a meteorite," said G. Jeffrey Taylor of the Hawaii Institute of Geophysics and Planetology at the University of Hawaii in Honolulu.

Taylor said the meteorite is perched like they are when found in Antarctica. In that case they are revealed by sublimation of the ice, after being transported a long way.

Unless it fell very recently, the meteorite on Mars was probably buried...then excavated when the surrounding dirt was removed," Taylor speculated. "This leads to some interesting possibilities and questions."

First, the meteorite is not weathered much, indicating dry conditions since it landed. "That is consistent with the presence of minerals that are easily altered by water, such as olivine," he said, which would rot away in several thousand to a few tens of thousands of years -- depending on temperature -- if sitting in water.

Another observation, Taylor noted, is how would such a meteorite get buried in the first place...by brief flood, wind, or by self-burial when it whacked into Mars? That earns an "I dunno", he said.

Furthermore, assuming it was buried, what processes uncovered the meteorite? Taylor advised that wind is a likely possibility, but wondered how long that would that take.

Determining when that meteorite landed is an answer that can't be known absolutely without someone bringing a piece to Earth, Taylor said.

But the question of how many meteorites litter the surface of Mars is an intriguing one.

"It seems amazingly lucky for Opportunity to find this, even given that rover's luck. So there might be plenty of them. This might have to do with proximity to the asteroid belt, but especially the dry conditions on Mars. That's where we find lots of meteorites on Earth, in dry deserts of northern Africa, Australia, and New Mexico, and the cold desert of Antarctica," Taylor concluded.

"It is way cool!" That's the short and simple view from Laurie Leshin, Director of the Center for Meteorite Studies in the Department of Geological Sciences at Arizona State University in Tempe, Arizona.

"I would very much like to see them examine some of the other rocks strewn along the plains of Meridiani -- maybe this is the meteorite collector's dream site -- like Antarctica here on Earth. It would be interesting to see if they can find some other types of meteorites," Leshin said.

Leshin placed the meteorite find on Mars into a larger picture.

Dubbed "Heat Shield Rock" the meteorite can be considered an extension of the story of water at the Meridiani site, Leshin said. "The rocks at Meridiani indicate water in the past, and this meteorite -- with its apparently fresh metallic surface -- probably shows how little water has been involved in the recent history of this place. It reinforces our notion that Mars in the past may have supported extensive liquid water, but that Mars today is a dry, cold desert," she said.

Leshin's bottom line: "Turns out that a very harsh place for life is a great place to preserve meteorites!"