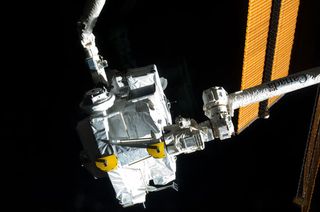 NASAengineers have revived a vital air-scrubbing system on the International SpaceStation and are hunting for the source of the glitch that sent it offline.

Theyultimately revived the life support gear in a manual mode, one that requiresextra flight controllers on Earth to keep it working. Normally, the system runsautomatically and NASA is hopeful that a software patch expected late Sundaywill recover that ability as well.

?We?restill trying to determine exactly what the root cause of the problem was,? spacestation flight director Brian Smith told reporters in a Sunday briefing. ?Butin the meantime, we?re doing a great job managing the [carbon dioxide].?

Smith saidthat at no point did mission managers plan to cut Endeavour?s stay short at thespace station if the CDRA system wasn?t restored. The station has a stockpileof extra air-scrubbing canisters that could have supported the large joint crewfor the rest of their docked mission, he added.

The spacestation doubled its crew size from three to six people in late May, and then temporarilyjumped to 13 when Endeavour arrived. With each population boost, the amount oftime engineers have to respond to life support system glitches like the air-scrubbersystem?s goes down, Smith said.

?So thisproblem got immediate attention,? he added.

On Sunday,astronauts used robotic arms on the station and Endeavour to pack up a Japanesecargo carrier that was used earlier in their mission to deliver the firstexperiments to the orbiting lab?s newKibo porch. The crew is also preparing for the spaceflight?s fifth andfinal planned spacewalk, which is set for Monday.