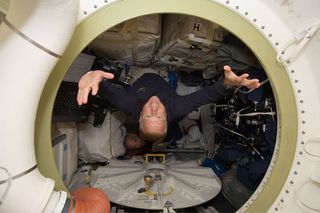 NASA Astronaut Tim Kopra floats toward his new home - the International Space Station - after arriving aboard the shuttle Endeavour during the mission of STS-127 on July 17, 2009.
(Image: © NASA.)

The 13people living on the International Space Station took some hard-earned time offSaturday, a welcome relief after a hectic week of orbital construction.

It?s a rarerest day for the station?s six-man crew and seven visiting astronauts from thespace shuttle Endeavour, who have plowed through a week packed with fourspacewalks and robotic arm work to upgrade the orbiting laboratory with newbatteries, spare parts and - their crown jewel - a brand new Japaneseporch, complete with experiments.

?On a verylong mission like this, it?s really important that they get some time torecuperate and recover and really just enjoy being on orbit as the first13-person crew,? space station flight director Holly Ridings told reporterslate Friday.

MissionControl let Endeavour?s crew sleep in more than an hour this morning to givethe astronauts some extra rest. In addition to resting and swapping spacestories with their crewmates, the astronauts will have a chance to play in zerogravity, look out the window or make calls to friends and loved ones on Earth.

Canadian astronautJulie Payette, Endeavour?s lead robotic arm operator, has said she?s eager formore time to look down at her home planet. She is making her secondspaceflight, but her first one was 10 years ago, when the space station waslittle more than two small, empty modules.

?On myfirst flight I was working mostly inside the space station, which at the timehad no windows because the windows hadn?t arrived yet,? Payette told reportersbefore flight. During the interviews this morning, she said she was enjoyingher flight.

?I think itis a complete privilege to be up here and be able to see the Earth from aboveand floatin weightlessness,? Payette said, adding that it is especially fun to zoom throughthe station?s many modules.

Endeavourastronauts have passed the midpoint of their 16-day mission to deliver thestation?s new science experiment porch, which they added to the exterior ofoutpost?s $1billion Kibo lab last week. They also delivered spare parts and a newcrewmember for the station?s crew.

The stationcrew and Endeavour astronauts make up the largest crowd in history evergathered in one place in space. While the population in space has hit 13before, it was usually spread across multiple - and separate - spacecraft likethe station, shuttle and Russian Soyuz vehicles. The station doubledits crew size from three to six people in late May.

Endeavourcommander Mark Polansky said that while quarters can be a little crowded,particularly around mealtime with every one crammed around a makeshift diningtable, for the most part the station has ample room for the enlarged crew.

After all,it has nine main rooms and an interior living space about the size of a 747jumbo jet. And unlike on Earth, when crowded hallways make it impossible topass, there?s a solution in the weightlessness of space.

?You just floatover the top,? Polansky said in a series of TV interviews this week.

Polansky andhis crew will speak with reporters on Earth before beginning their day off.NASA?s Mission Control in Houston plans to stay as quiet as possible to theastronauts enjoy their time off, Ridings said.

After theirday off, Endeavour astronauts will get back to work Sunday with somechallenging robotic arm chores to retrieve a cargo platform from the tip of thestation?s Kibo porch. One last spacewalk, the fifth of the mission, isscheduled for Monday.

Endeavouris due to depart the space station on Tuesday and land July 31.