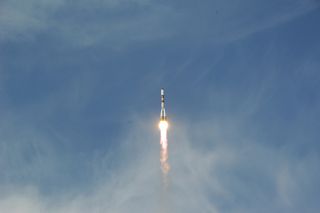 A Russian Soyuz rocket soars into a blue sky carrying the unmanned cargo ship Progress 34 toward the International Space Station on July 24, 2009. The rocket launched from Baikonur Cosmodrome in Kazakhstan.
(Image: © RSC Energia.)

An unmannedRussian cargo ship launched toward the International Space Station Friday while13 astronauts inside the outpost geared up for a tough spacewalk.

TheProgress 34 cargo ship lifted off at 6:56 a.m. EDT (1056 GMT), though it wasmid-afternoon at its Central Asian launch site as it soared into orbit fromBaikonur Cosmodrome in Kazakhstan. At the time, the linked space station andshuttle Endeavour flew 218 miles (350 km) above Sapporo, Japan.

Russia?sMission Control radioed news of the successful launch to Russian cosmonautGennady Padalka, who is currently commanding the station?sExpedition 20 crew.

?Perfect!We?ll be waiting for it,? Padalka replied. ?Maybe they?ll bring something freshfor us.?

The Progress34 cargo ship, known in Russia as M-67, is carrying 2 1/2 tons of freshsupplies for the station?s core six-man crew and is due to arrive Wednesday, aday after Endeavour?s crew departs.

Padalka andhis crew are in the middle of a packed construction mission with theseven Endeavour astronauts. The shuttle arrived last week to boost thestation?s population to 13, its highest ever.

A stationtoilet broke early in the mission, but was swiftly repaired to the relief ofthe crowded station?s joint-crew.

Endeavour astronautshave delivered a new crewmember and a Japanese experiment porch to the stationwhile docked at the orbiting laboratory. They are performing the fourthof five spacewalks for the mission today to replace the station?s oldestsolar array batteries.

The shuttlecrew is slated to undock on Tuesday and land July 31.