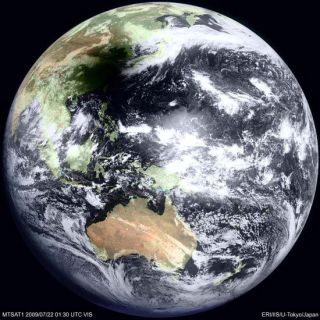 When a moon shadow crossed Earth Wednesday, millions of people in India and China looked up. At the same time, a Japanese satellite looked down.

The new image, released by NASA's Earth Observatory in cooperation with Japanese researchers, reveals a dark spot on our planet, covering Taiwan and surrounding areas, as the moon got directly between the sun and Earth.

The total solar eclipse was the longest one that will occur this century, lasting for up to 6 minutes and 39 seconds. It awed locals and many globetrotting skywatchers who trekked to see it.