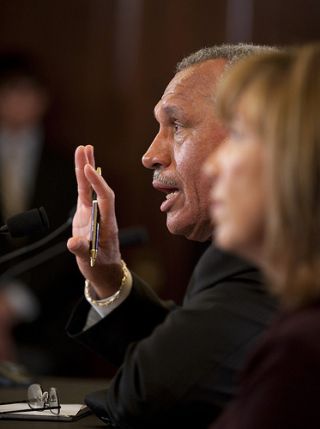 This story was updated on July 23.

WASHINGTON -NASA Administrator Charlie Bolden displayed the softer side of his managementstyle while promising strong leadership at a critical time for the space agencyduring a Tuesday address to agency employees broadcast from NASA headquartershere.

During thehour-long talk, which included remarks by NASA Deputy Administrator LoriGarver, Bolden said the agency faces numerous challenges in a time of economicuncertainty, including a call from the White House to find an affordable and sustainable way to reach the Moon and points beyond.

?Thechallenge is to figure out the most efficient and cost-effective path to getthere,? Bolden said the day after NASA commemorated the 40th anniversary of thefirstlunar landing on Monday, 1969. Bolden, who was sworn into office July 17alongside Garver at NASA headquarters, said that while the administration ofU.S. President Barack Obama is committed to human space exploration, the agency?cannot continue to survive on the path we are on.?

Boldentalked about accompanying Apollo 11astronauts Buzz Aldrin, Neil Armstrong and Michael Collins to the WhiteHouse the day before to? meet Obama, who spoke before the cameras about the lastinglegacy of the Moon landing, the ?extraordinary work? the agency does today,?and his confidence in Bolden and Garver to ?continue the inspirational missionof NASA.?

Boldentalked openly about his upbringing and beliefs, labeling himself? an?environmentalist,? a ?social liberal and a fiscal conservative? who willpromote an open-door policy with NASA employees. He also characterized hisapproach to the media as ?friendly,? but urged employees to bring bad news tosenior staff rather than sharing it with the press.

Bolden, whosaid during his July 8 confirmation hearing that safety would be a top priorityas NASA administrator, told employees that work-related casualties are an allbut inevitable part of the space business.?

?We?re in avery, very risky business,? Bolden said. ?People don?t like to hear that, butthey?re going to hear it from me.?

Boldendescribed himself as a man of faith with a healthy respect for all religions, awarm and light-hearted Episcopalian and an unabashed ?hugger? who is not shyabout expressing emotion. ?That?s theother thing you?ll get used to. I cry.?

The childof two educators, Bolden spoke of the importance of teaching and the differencea caring adult can make in the life of a child. He encouraged NASA employees towork with kids through volunteer and community service opportunities.

Bolden saidhe and Garver are? meeting with senior White House officials this week in aneffort to address the space agency?s challenges, including a forthcomingdecision on the path ahead for NASA?s manned spaceflight program.

During histalk, Bolden said he would be relying on Garver for her organizational skills andpolicy expertise.

?Some ofyou will be flustered because I?m not very detailed,? Bolden said. ?Lori, thankGod, is somewhat more detailed and so you will find that she?s organized. I?mnot. We make a great team. She knows a lot of policy, I know none. She knowsWashington, I know a little.?

Garver, whois returning to the agency after an eight-year hiatus in the private sector,said she hopes to better communicate NASA?s relevance to policymakers as wellas the American public in an effort to restore the agency?sfaded luster since the last U.S. lunar landing more than a generation ago.

Garver, whopreviously served as a NASA associate administrator for policy and plans, saidshe was encouraged by the media attention the 40th anniversary commemorationhad garnered, and lauded America?s pioneering role in the international spacestation, which she characterized as ?keeping the country and the worldtogether.?

?I knowfeelings are something that weren?t too popular the last few years at NASA. Butwe?re back. Feelings are back,? she said.

Her remarksstood in sharp contrast to those of Bolden?s predecessor, Mike Griffin, whoonce told a Capitol Hill breakfast audience, ?I don?t do feelings. Just thinkof me as Spock.?