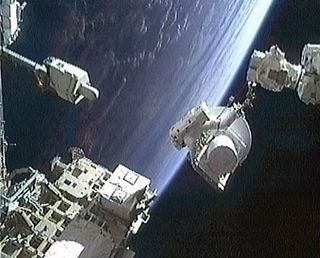 Spacewalker Dave Wolf works outside the International Space Station during the second spacewalk of the STS-127 mission on July 20, 2009. Here, he totes a 6-foot space-to-ground antenna to a storage platform on the 40th anniversary of the Apollo 11 moon landing.
(Image: © NASA TV)

Twospacewalking astronauts ventured outside the International Space Station Mondayto stock the outpost with vital spare parts on a day that, 40 years ago, sawthe first-ever moon landing by people from Earth.

Thespacewalkers were floating outside at the exact time - 4:17 p.m. EDT (2017 GMT)- in which astronauts Neil Armstrong and Buzz Aldrin touched down on the moonwith theirEagle lander on July 20, 1969.

?How cool,?said Canadian astronaut Julie Payette from inside the station as the day began.

Payette andEndeavour shuttle pilot Doug Hurley controlled the station?s robotic arm frominside the outpost during the spacewalk while crewmate Chris Cassidychoreographed the excursion from aboard the orbiter.

?A specialday to do this on the 40th anniversary of Apollo,? Cassidy said.

Monday?sspacewalk was the second of five on tap for Endeavour?s crew, and the 202ndexcursion by American astronauts since Armstrong and Aldrin walkedon the moon, NASA officials said.

EarlierMonday, NASA held a press conference at its Washington, D.C., headquarters witha group of Apollo astronauts who lamented the $100 billion investment into thespace station. Apollo 13 commander Jim Lovell said that after 10 years ofconstruction, the station?s return on that investment has been about nil.

?It?salmost a white elephant,? Lovell said. ?And until we can get a return on thatinvestment, it?s money wasted.?

Lovell,Aldrin and other astronauts chided NASA and the United States in general, forlosing its nerve to take ambitious and dangerous risks for the sake ofexploration. Mars - not the moon - should be the ultimate goal, the veteranApollo astronauts said.

?We haveallowed our country to turn into a risk averse society,? said Apollo 7 lunarmodule pilot Walt Cunningham. ?It?s reflected at NASA, it?s reflected ineverything that we do today?there are things worth risking your life for.?

Wolf andMarshburn began their orbital work at 11:27 a.m. EDT (15:27 GMT) as the linkedshuttle and station flew 220 miles (354 km) above the country of Kazakhstan inCentral Asia. They spent the bulk of their time moving spare parts brought upto the space station aboard NASA?s shuttle Endeavour, which arrived at theoutpost last week.

With Wolfperched at the tip of the station?s robotic arm, the spacewalkers carefullystowed a 6-foot (2-meter) antenna, a cooling system pump and a motor for thestation?s railcar-like mobile transporter on a storage platform attached to atruss on the outpost?s metallic backbone. At times they had only inches ofclearance between their cargo and the immense bulk of the space station.

Thespacewalkers hit a few snags that slowed their orbital work. Wolf had somedifficulty positioning the foot restraint that served as his perch at the tipof the station?s robotic arm.

Anattachment hook on Marshburn?s retractable 85-foot (26-meter) tether slippedfrom his spacesuit-clad hands during the excursion, delaying the spacewalkuntil he could retrieve it from under an equipment cart. At no time wasMarshburn at risk, since his 55-foot (16.7-meter) safety tether and the longerline remained connected and securely in place, mission managers said.

Because ofthe glitches, Wolf and Marshburn ran out of time before they could set up a newcamera on the station?s Japanese-built Kibo lab. It was the sixth careerspacewalk for Wolf and the first for Marshburn.

Endeavour?sSTS-127 astronaut crew is currently in the midst of a 16-day mission to delivera new crewmember and a large external experiment porch for the space station?s Japanese-builtKibo lab.

While thespacewalkers worked outside, the station?s Expedition 20 crew successfully repaireda flooded toilet inside the orbital outpost. The $15.6 million space commodebroke down on Sunday, posing a potentially uncomfortable problem for thecrowded station?s crew of 13 people (seven aboard Endeavour and six stationspaceflyers).

The jointshuttle-station crew is relying on two working toilets aboard the station becausethe shuttle Endeavour cannot empty its own bathroom?s wastewater tank whiledocked at the outpost. The system?s nozzle on Endeavour?s exterior would spraythe wastewater over a new experiment porch, which astronauts installed Saturdayoutside the Kibo lab.

With thetoilet now working, Endeavour?s crew does not have to worry about filling theshuttle?s wastewater tank or resorting to Apollo-era waste collection bags thatwere packed aboard just in case.

The U.S.space agency bought the station toilet from Russia in 2007 in a $19 milliondeal that included the commode and spare parts for other systems, a NASAspokesperson told SPACE.com. It was delivered to the space station lastfall.