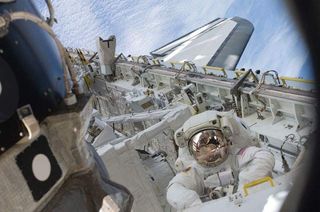 Astronaut Tim Kopra is pictured in Endeavour's cargo bay during the first of five planned spacewalks for the STS-127 crew. When the Endeavour crew returns to Earth, Kopra will stay onboard the space station to serve as flight engineer for ISS expedition duty.
(Image: © NASA)

Astronauts will unload some spare parts for the International Space Station Monday in a spacewalk that comes 40 years to the day of the first moon landing by men from Earth.

During the planned 6 1/2-hour spacewalk, astronauts Dave Wolf and Tom Marshburn will unpack a container filled with a spare antenna, pump mechanism, and small motor that was delivered to the orbital outpost when the Endeavour docked Friday.

It is the second spacewalk for Endeavour's astronauts, who lifted off last week on the eve of the Apollo 11 mission's launch and now find themselves in space with six station crewmembers during the 40th anniversary of the historic July 20, 1969 moon landing.

"It's amazing where we've come since that time," lead space station flight director Brian Smith. "Everything we've accomplished with the space station is built upon what was done in the Mercury, Gemini and Apollo programs."

Smith said the occasion was a chance to reflect on the changes to the space program since.

"One of the biggest contrasts to me, and a very positive one, is the international part of the station," he said. "Back when we landed on the moon, obviously we weren't working together. Now you look at what happens when countries team up together. Now we can do so much more and set an example for the rest of the world."

While the Wolf and Marshburn work outside, engineers on Earth are trying to come up with a fix for the broken toilet aboard the orbital outpost. The flooded toilet is one of just two on the outpost for all 13 people - a record high - living and working aboard the linked station and shuttle Endeavour. There is a toilet aboard the shuttle Endeavour that astronauts can use, but NASA wanted the crew to limit its use since the waste it collects cannot be vented overboard since it could contaminate a new experiment porch that spacewalkers helped install on Saturday.

Monday's spacewalk will be dedicated to moving a set of vital spare parts from a carrier to their permanent stowage place outside the station.

The antenna will be used on a space-to-ground communications system. The pump mechanism helps power a cooling system, and the motor is a drive system for a movable platform on the station's back-bone like truss.

While Wolf is a veteran spaceflyer with five spacewalks under his belt, Marshburn will be making the first spacewalk of his career.

"They're going to allow me a few minutes what they call translation adaptation,' for the first time in the spacesuit to hold on to a handrail and just kind of use the muscles of your wrist, kind of move up and down, kind of get a feeling of actually how you're going to start moving rather than just taking off and find out you don't know how to stop and before it's too late, you pull yourself off or your feet, you know, come flipping around and you bang into something," Marshburn said in a preflight interview. "So they'll give me about ten minutes to practice moving around a little bit."

Astronauts unloaded the carrier from Endeavour's cargo bay Sunday using the shuttle and station robotic arms. Wolf and Marshburn plan to transport the spare parts to a storage platform on the station's truss.

This will be a tricky task because the equipment is packed tightly in the carrier and the spacewalkers must make sure the delicate gear doesn't hit any of the other cargo on its way out.

"Tom and I will be manipulating this box slowly down, kind of holding our breath," Wolf said. "And I can tell you after we get that locked into place and didn't damage that antenna, I'm going to be breathing a lot easier."

When the spacewalkers finish that task, they plan to move over to a new exposed science porch that was attached to the station's Japanese Kibo lab Saturday. There they will install a camera system on the porch so that astronauts inside the station can view the outdoor platform.

While Wolf and Marshburn are outside spacewalking, pilot Doug Hurley and mission specialists Julie Payette and Koichi Wakata will help out from inside by operating the station's robotic arm. This is essential because Wolf plans to reach into the cargo carrier while attached to the end of the arm, called the Canadarm2. Marshburn will float freely to carry out his tasks.

"It will be a great deal for Dave because he's going to get to see some incredible views of space station as he's flying up and over the truss, and then back down to the [cargo carrier] each time," Hurley said in a NASA interview. "So he's probably got one of the best seats in the house for EVA 2."