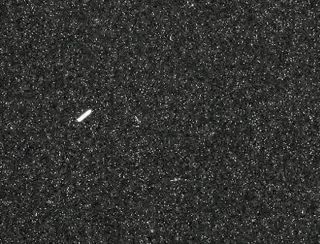 A shot of the night sky taken from the Mars Spirit robot. Canopus shows clearly as a streak on the left side.
(Image: © NASA/JPL)

The Mars robot Spirit has been stuck on the side of a sand dune. Dust accumulations on its solar panels limit its power. Engineers ponder efforts to free the robot, while it sits idle.

A stray gust of wind blew most of the dust off, giving Spirit more juice than it has had in years. According to a recent Universe Today report, NASA scientists decided to give the robot a chance to do what most of us have done at one time or another - look up at the stars.

"Certainly, a month or more ago, no one was considering astronomy with the rovers," Mark Lemmon, planetary scientist at Texas A&M University and member of the rover team, told Universe Today's Nancy Atkinson in a June 27 report. "We thought that was done. With the dust cleanings, though, everyone thinks it is better to use the new found energy on night time science than to just burn it with heaters."

"The Canopus images may become a regular occurrence, as a way to monitor dust and/or ice in the sky at night-much as we use Sun images in the day," Lemmon told Universe Today. "For something like that, we can pick an aim (Canopus, Orion, etc.) and choose filters. We might use color filters to look for any differences that show up, or the clear filter for the most sensitive measurement. Star exposures can go up to 5.5 minutes (compare to 0.1-0.5 sec for a normal day image). We cannot track stars, so they trail after 10 seconds or so-as you see Canopus doing (see photo). In longer exposures, hot pixels and cosmic rays show up as points or cluster of light."

Scientists also use the images to look for evidence of night-time clouds, fog and haze that can be noted from the Martian surface, Universe Today reported.

If we are going to have automated robotic probes out there exploring the galaxy, like the biological package probes from science fiction writer Larry Niven's 1976 story A World Out of Time, we're certainly going to need stargazing robots.

(This Science Fiction in the News story used with permission of Technovelgy.com)