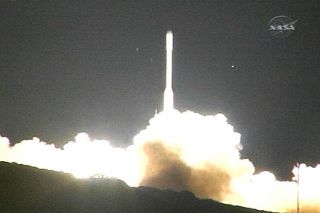 NASA’s Orbiting Carbon Observatory and its Taurus XL booster lift off from Vandenberg Air Force Base on Feb. 24, 2009. A contingency was declared a few minutes later.
(Image: © NASA TV)

NASA hasfound four potential causes for the loss of a $273 million climate satellite thatcrashed into the ocean just after its launch earlier this year, the spaceagency said Friday in a new report.

The advancedOrbiting Carbon Observatory satellite, built to study atmospheric Earth?s carbondioxide levels, launched spaceward on Feb. 24 aboard a Taurus XL rocket from California?s Vandenberg Air Force Base, but it failed to reach orbit. Instead, it fellback to Earth and crashed into the ocean waters near Antarctica.

Japan's recently launched "Ibuki"climate-studying spacecraft, as well as other satellites already in orbit,may be able to compensate for the lack of OCO.

The MishapInvestigation Board led by Rick Obenschain, deputy director at NASA's GoddardSpace Flight Center in Greenbelt, Md., verified that the Taurus launch vehiclefairing failed to separate upon command. The fairing is a clamshell structurethat encapsulates the satellite as it travels through the atmosphere. Thefailure to shed the fairing mass prevented the satellite from reaching itsplanned orbit and resulted in its destruction.

The boardidentified four potential causes that could have resulted in the fairing notseparating:

The panelalso provided recommendations to prevent any future problems associated withthe four hardware components that could have caused the OCO accident.

Since its1994 debut, the Taurus rocket has flown six successful missions out of eightlaunches to orbit 12 satellites. The last Taurus launch reached spacesuccessfully in 2004. The one failure before Tuesday's contingency occurredin September 2001.