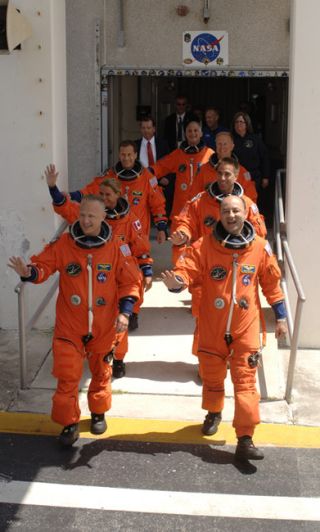 CAPE CANAVERAL, Fla. - Astronauts have a reputation fortheir super-human commitment to a mission, but even spaceflyers like theshuttle Endeavor?s crew need a break once in a while - especially after the ?tryingordeal of five launch scrubs.

On both Sunday and Monday the crew boarded Endeavour andwaited, lying on their backs in the small shuttle?s crew cabin for hours ?beforetheir liftoff plans werefoiled by weather.

Tuesday is a much-needed rest and recuperation day for thespaceflyers, who are due to try to blast off again Wednesday at 6:03 p.m.EDT (2203 GMT).

Polansky and pilot Doug Hurleyplan to practice landing the space shuttle this evening by guiding a modifiedGulfstream aircraft to the ground in simulated shuttle landings.

The astronauts aren't the onlyones who are tired. NASA's large ground workforce has been workingfor many days to prep the shuttle for each launch attempt and keep it ingood shape for its eventual liftoff. Though they've been working hard,exhaustion hasn't set in yet, launch director Pete Nickolenko said.

"The team's postured and ready," Nickolenko said Mondaynight after the latest delay. "Certainly folks have been at it for awhile. Actually I'd characterize the mood as still very positive because wewere very close to making that attempt today. I still think that we are veryconfident and we?re ready to give it a shot for the attempt on Wednesday."

Yesterday was the fifthdisappointment for a mission that has been held on the ground by persistentthunderstorms near Kennedy Space Center here and a gas leak on the shuttle thathas since been repaired. The mission is slated to deliver the last piece of thespace station?s Japanese Kibo lab during five spacewalks.

"Well, this isn't the tweet Ihoped to send, but it's just not easy to launch a shuttle," Polansky wroteafter Monday's scrub. "We're fine in spite of this, and we'll hope forWed."

Though the delays are frustratingfor everyone, especially the astronauts, it's the name of the game for such acomplex endeavor.

"Obviously they'redisappointed, but they understand," NASA spokesman Allard Beutel said."They've been training more than a year for this. If it takes acouple extra days to do the whole mission, I think they're okay with it. Thisis part of human spaceflight. After today they'll feel recharged, ready to gofor launch."