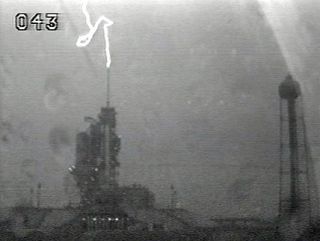 CAPE CANAVERAL, Fla. ? The lightning that thwarted today'splanned launch of the space shuttle Endeavour is a familiar problem for NASA'sshuttle fleet.

NASA called a 24-hourdelay to Endeavour's scheduled STS-127 lift off to investigate possibledamage after a powerful electrical storm hit yesterday and 11 lightning boltsimpacted Launch Pad 39A here at the seaside Kennedy Space Center.

The Florida coast is often the victimof lightning, as frequent thunderstorms and even hurricanes come in fromthe ocean on the East. If lightning does occur nearby, the giant metal space shuttlestanding tall atop its launch pad tends to attract the brunt of it.

Lightning ? a dischargeof electricity from the atmosphere ? usually targets the tallest thingaround. The space shuttle stands a towering 184 feet (56 meters) high, on topof a mounded pad. In addition to its height, the shuttle and its accompanyingstructures are mostly made of metal, which is a good conduit for electricity,so collects more of it.

"The launch pad gets hit all the time," said NASAspokesman Allard Beutel. "We've never had a direct hit [to the shuttleitself], though."

He estimated the pad had been struck dozens of times, thoughluckily no catastrophic damage has been done to a shuttle from lightning.

The space shuttles ? composed of main orbiter, orangeexternal fuel tank and twin solid rocket boosters ? have never sustained adirect lightning hit because of NASA's Lightning Protection System. A tallmetal lightning rod is installed on top of the Launch Pad to attract nearbylightning and route the electricity away from the shuttle through a series ofattached metal wires.

"The Lightning Protection System takes the charge andchannels it away," Beutel told SPACE.com.

In 2006 the space shuttle Atlantis postponedits STS-115 flight after a powerful lightning bolt impacted with a currentof 100,000 amps ? the strongest lightning strike yet.

And lightning isn't just a risk while the vehicles sit atthe pad; If lightning struck a shuttle during flight the results could bedisastrous, as the shuttle contains sensitive vital electronics and flammablepropellant. The rocket's pyrotechnic system ? the fuel materials that undergochemical reactions to ignite and thrust the shuttle space-ward ? could easilyignite if hit with a powerful electric shock.

That's why NASA takes careful precautions not to launch ifthere is a chance of an electrical storm in the area. The metal shuttle couldeven cause a lightning bolt while flying through the sky.

Airplanes have also been known to be struckby lightning.

So why does NASA launch space shuttles from thislightning-prone spot?

"We're closest to the equator," Beutel said."The Earth's rotation gives an extra push, so you use less fuel to getup."

When rockets lift off from Cape Canaveral, the planet's spinthis far south helps loft the vehicle into orbit easier than from a locationtoward the north of the United States.