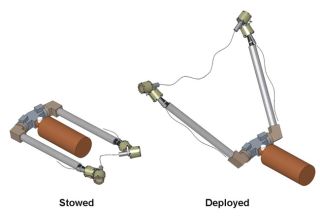 On the hunt for liquid water on Mars, scientists are testing the gadget pictured above that could peer deep below the planet's surface, through solid rock, further down even than radar has penetrated.
(Image: © SwRI)

A cannon-launched contraption made of wire, wood and PVCpipe could ramp up the search for water on Mars.

The inauspicious prototype for the device, called the MarsTime Domain Electromagnetic Sounder, is a long wire loop that lays flat on the ground andcreates a changing magnetic field. That field triggers electrical currents thatflow deep underground and shift in response to features they pass through, suchas bedrock or liquidwater.

A consortium of scientists is testingthe gadget, which could be launched from a lander or rover to peer belowthe Martian surface - through solid rock - and see deeper than any subsurfaceradar to date. Thecurrents generated by the device create their own magnetic fields that the wire at the surface candetect and use to paint a picture of what lies beneath.

"We think there are small amounts of water inthere," Robert Grimm, the project's principal investigator at theSouthwest Research Institute in Colorado told SPACE.com. "What the biologistswant to find is some kind of aquifer, a sponge of moisture at a certaindepth - a depth where Mars' own geothermal heat can sustain liquid water."

Grimm's paper research the device is detailed in the onlineMay 15 edition of the journal Planetary and Space Science.

The loop envisioned for Mars would consist of about 656 feet (200 meters) of copper wire.The device's masterminds tossed around several ideas for how earthbound engineerscould unspool and arrange the wire in the dust of Mars. They could trawl it outbehind a rover that rolls in a wide circle, they thought, but in the interestof ease, not to mention dramatic flare, they decided to shoot it out. Acompressed gas cannon fires projectiles that rapidly uncoil the wire behindthem in flight.

Now the wire is launched from a PVC pipe tacked on to anoff-the-shelf pressurized air tank, but if it is ever sees Martian soil, thelaunch tubes will likely be aluminum, Grimm said.

?The main challenge was getting the spooling right,? saidRobert Warden, a mechanical engineer at Ball Aerospace and Technologies Corp.,which built the deployment system. The spools had to be compact but pay outquickly at nearly 70 mph (112 kph).

From the test launches the scientists determined that asimilar device built for a Mars mission would weigh less than 13 pounds (6 kg)and could detectgroundwater as deep as 3 miles (5 km) beneath the Martian crust.

The device measures how anythingbelow the surface conducts electricity. It could detect conductivity in thesoil, bedrock, metals and groundwater. Such devices, minus the launchers, arealready used for underground exploration here on Earth. They are calledinductive systems.

The launched-wire device generates electricityto detect magnetic fields in a manner similar to another version of suchdevices on Earth that passively detect the planet's natural electromagneticenergy underground. Grimm is building a new water detector for Mars that woulduse the same principle. Since it would not need to generate electricity itwould be more compact. There is one hitch, though.

"The big question on Mars is to know if that energy isthere. We have to go there to measure it to see if we can use it," Grimmsaid.

NASA has no plans to use the induction systems now, but ifit were to deploy one, it would likely fly out ona rover, Grimm said. Or it could be designed to crash-land from a Marsorbit, the blow softened by air bags, for example, he says.

"It just comes down to the 'who cares factor,'" hesays. "If people want to find out if there's some kind of water lockeddeep down then they'll have to go with the induction method."