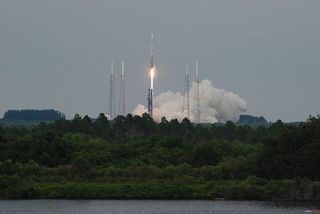 NASA's LRO and LCROSS moon probes blast off atop an Atlas 5 rocket in this June 18, 2009 image to begin NASA's lunar return. This image was taken as the ULA rocket launched from the Cape Canaveral Air Force Station in Florida.
(Image: © Robert Pearlman/collectSPACE.com)

NASA's first moon mission in more than a decade blasted off Thursday, launching two unmanned probes to hunt for water ice and map the lunar surface.

The two new probes — a powerful lunar orbiter and a smaller craft destined to crash into the moon's south pole — atop an Atlas 5 rocket that lifted off from the Cape Canaveral Air Force Station in Florida. Their launch comes nearly 40 years after the Apollo astronauts first set foot on the moon in July 1969.

"We look forward to bringing the country the first chapter of our new journey of exploration Todd May, manager for NASA's Lunar Precursor Robotic Program.

Stormy weather threatened to keep the two moon probes on Earth at least one more day, and prevented two initial opportunities to launch the mission. But the skies cleared in time for today's liftoff at 5:32 p.m. EDT (2132 GMT), the mission's third and last chance of the day.

Leading the charge on the $583 million mission is the Lunar Reconnaissance Orbiter (LRO), a satellite the size of a Mini Cooper car laden that is packed with seven instruments to map the moon and study its environment to aid future manned missions. The solar-powered spacecraft should take four days to reach the moon, and then enter a 2-hour orbit around the lunar poles.

Not since 1998's Lunar Prospector mission has NASA sent a probe to the moon, though probes from China, Japan and India have visited Earth's nearest neighbor in recent years. The LRO mission, and its partner the Lunar Crater Observation and Sensing Satellite (LCROSS) impactor, are NASA's robotic vanguard in its renewed push to send humans beyond low-Earth orbit.

LRO separated from the Atlas 5 rocket from its partner craft about 45 minutes after liftoff. LCROSS and its attached Centaur stage are slated to reach their intended orbit four hours after launch, mission managers have said.

"All appears well with LRO and we wish them luck," NASA launch director Chuck Dovale said after launch.

NASA had delayed the moon mission several times, first from a October 2008 target and most recently from a planned Wednesday liftoff. The agency pushed today's liftoff back one day to allow the shuttle Endeavour a second launch attempt that was thwarted by a gas leak.

The moon up close

When NASA's Apollo landing missions sent 12 astronauts to the lunar surface, they only touched down in six spots around the moon's equator. Each site was explored for a few days at a time, and only in daylight. NASA hopes to return astronauts to the moon by 2020 to explore regions that have never been seen by the human eye.

The high-resolution maps generated by the new lunar orbiter will provide the "the guidebook for future exploration of the moon," said Richard Vondrak, NASA's LRO project scientist.

LRO is expected to spend a year building complete maps of the moon and take a close look at 50 potential landing sites for future manned missions. The spacecraft also carries sophisticated gear to measure the radiation hazards future astronauts might face and seek out pockets of hydrogen-rich areas, which may contain frozen water at the bottom of permanently shadowed craters around the moon's south pole.

After a year reconnoitering the moon from a 31 miles (50 km) orbit, LRO is slated to shift into a years-long science expedition to study the lunar surface and environment.

Unlike LRO, it will take NASA's second lunar probe about four months to reach the moon. LCROSS actually consists of two part — a small shepherding spacecraft and a massive, 41-foot (12-meter) tall Centaur rocket stage that it will slam into the moon in early October.

The mission is simple: crash two probes into a permanently shadowed crater at the moon's south pole at about 5,580 mph (8,980 kph), and sift the resulting ejecta for signs of water.

"It"s really lifting material up into the sunlight for the first time in a billion years so we can study it," said LCROSS project manager Tony Colaprete of the mission. "We're exciting to get going and to explore the moon in a way that's never been done before."

Past missions have found rich hydrogen deposits around the moon's south polar region, suggesting that some form of water ice may exist where the sun never shines.

Finding usable water ice on the moon would be a priceless find for NASA, since future astronauts could tap into that resource instead of lugging all of their water supplies from Earth. It currently costs about $50,000 per pound for anything launched to the moon, NASA officials said.

And while other missions have ended with a lunar crash — most recently Japan's Kaguya probe — LCROSS is the first deliberately slam two vehicles into the moon at a steep angle while other satellites and the world look on.

NASA plans to use LRO, the Hubble Space Telescope and other satellites, as well as a network of ground-based professional and amateur astronomers to watch as LCROSS guides the Centaur in to its crash, and then follows with its own impact four minutes later.

"We have many eyes looking at the moon in many ways," Colaprete said.