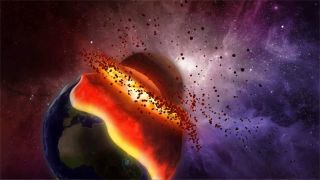 Due to the chaotic evolution of the planetary orbits in the solar system, a close approach or even a collision could occur between Mars and the Earth in less than 5 billion years, although the odds are small. Credits: Artistic design by J Vidal-Madjar; Planet textures from NASA; Copyright IMCCE-CNRS.

Our solar system has a potentially violent future. New computer simulations reveal as light chance that a disruption of planetary orbits could lead to a collision of Earth with Mercury, Mars or Venus in the next few billion years.

Despite its diminutive size, Mercury poses the greatest risk to the solar system's order.Results of the computer model show a roughly 1 percent chance that the elongation of Mercury's orbit will increase to the point where the planet's path around the sun crosses that of Venus. That's when planetary pandemonium would ensue, the researchers find, and Mercury could be ejected from the solar system, or collide with the sun or a neighboring planet, such as Earth.

The potential smash-ups, however remote, are detailed in the June 11 issue of the journal Nature.

"I seethe results as a case of the glass being 99 percent full and 1 percent empty,"said Gregory Laughlin of the University of California, Santa Cruz. "While it's possible that a collision could occur billions of years from now, it's actually very unlikely." Laughlin was not involved in the current study but wrote an accompanying analysis of the research in Nature.

But in some less likely scenarios, the change to Mercury's orbit leads to a total destabilization of the inner solar system (the terrestrial planets) in about 3.3 billion years, possibly triggering collisions of Mercury, Mars or Venus with Earth.

"The most surprising outcome is the destabilization of the orbit of Earth and Venus," Laskar said during a telephone interview.

The result is a Venus-Earth bang-up.

"You first need Mercury to be destabilized by gravitational interaction with Jupiter," Laskar said. "Then this may destabilize Mars, which then can come very close to the Earth. Only then can you have destabilization of Venus'orbit and a collision with the Earth."

When the researchers looked at different cases involving this close approach of Mars and Earth, they found that five set-ups would lead to Mars being flung out of the solar system. And in nearly 200 of the cases, two celestial bodies will collide? 48 of which involve Earth.

While planet orbits might seem stable today, they aren't. And over billions of years,they are less so. Basically, the planets can perturb one another through gravitational interactions. Astronomers say that in the distant past, some of the planets of our solar system could have been on significantly different orbits and migrated to their present locations.

And as the sun ages, it is expected to swell and lose mass; previous studies have shown that could have significant effects on the planets in the next 7 billion years or so. Earth might be vaporized when this happens, or it might ? with a gravitational assist from a passing star ? be booted right out of the solar system. A study in 2001 by Laughlin, then at NASA, and Fred Adams of the University of Michigan put the odds of the Earth being ejected at one-in-100,000.

Meanwhile,as planets move around, close encounters (especially with larger worlds like Jupiter) could fling them on wildly new trajectories.

Evidence for such melees has been found in exoplanetary systems, including one in which the object 2M1207B may have formed from the collision and merger of two planets. Our own moon was created when a Mars-sized object hit Earth about 4 billion years ago, theorists figure.

The new model results provide the strongest evidence to date of the solar system's future in this regard. "These are the first calculations that really answer the question of the long-term stability of the solar system in a truly definitive way," Laughlin told SPACE.com.

That's because Laskar and Gastineau's model relies on non-averaged equations and accounts for general relativity.

Previous models were based on averaged equations for planetary motion and didn't include the effects of general relativity. When considering planets that are about to collide, such equations don't work well to make accurate predictions. And it turns out general relativity, or the effect of gravity on time and space, does play a role in the crash scenarios.

Here's how:"Mercury's orbit is a slightly elongated ellipse. The sun lies at one of the foci of the ellipse, not at the center," Laughlin said."Over long periods of time (of the order 100,000 years), the orientation of Mercury's orbit rotates like a clock hand. General Relativity acts to speedup this clock-hand-like rotation, and this decreases the odds that Jupiter can drive large changes in Mercury's orbit."