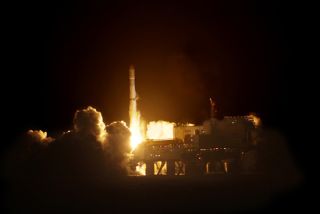 A Zenit 3SL rocket launches the Intelsat Americas 8 satellite into orbit from the Odyssey Launch Platform on the Pacific Ocean on June 23, 2005.
(Image: © Sea Launch.)

Satellite fleet operator SES is rethinking its strategy withrespect to its biggest rival, Intelsat, in light of Intelsat?s recently demonstrated ability to maintain a global presence despite its hugedebt load and its owners? ultimate goal of cashing out of the business, SESofficials said May 19.

In presentations to investors in London, SES officialsreiterated their view that, over time, SES?s stable investor base and moderatedebt load will?enable it to outlast Intelsat in regions that, while profitable,would exhaust Intelsat?scapital?expenditure limits.

In these cases, they said, SES will beready to use its financial strength to establish satellite beachheads inmarkets currently dominated by Intelsat.

SES Chief Executive Romain Bausch went so far as to say theeventual disposition of Intelsat assets as its current private-equity ownersseek an exit will be more important than the current global economic crisis inshaping the commercial satellite telecommunications landscape in the comingyears.

?It is not the crisis that will determine what will go on in ourindustry in terms of concentration,? Bausch said of a possible reshufflingof satellites assets worldwide.

?The main driver of concentration in our industry will [be]the need of the current owners of the large satellite operators. To be veryclear: Intelsat is today capital constrained because of its LBOs [leveragedbuyouts, which loaded the company with debt]. There is only one objective ofthe current owners of Intelsat: to prepare a profitable exit from thatbusiness. They are private-equity funds and their mission is not to remainshareholders of a satellite operator for 10 years.

?So there might be consolidation in our sector because ofthe shareholders of one of the two large satellite operators ? namely Intelsat? having to exit. This is much more important for the discussion aboutlandscape and concentration than the current crisis.?

Notwithstanding this strategic assessment, Bausch saidLuxembourg-based SES is rethinking its short-term assumptions following acouple of deals Intelsat put together. Intelsat?s New Dawn satellite, beingbuilt with South African partners, will require little capital outlay byIntelsat. The IS-22 satellite to be deployed over the Indian Ocean, meanwhile,is being financed largely by the Australian Defence Force?in exchange for a UHF-band payload that Australian forces will use for mobilecommunications.

Bausch said that in 2008, SES compiled an internalassessment forecasting that its in-orbit capacity would grow by 4 percentannually. The same forecast concluded that Eutelsat of Paris would increase its in-orbit transponder capacity by 2.5-3 percent annually, while Intelsat would reduceits in-orbit fleet by some 2.5 percent a year.

SES now concludes that with the ?very creative financing?Intelsat has demonstrated, ?they may not go for such an important decrease inthe capacity they will offer. So we will probably have to revisit our model andto be less aggressive regarding Intelsat shrinking its satellite capacity. Butstill, they will not increase capacity.?

SES is in the middle of a substantial fleet-expansionprogram that will add more than 20 percent to its current in-orbit transpondercapacity in the coming years from satellites already under construction.

Robert Bednarek, president of SES Americom New Skies, one of two SES divisions ? SES Astra is the other ? that divide up the world from asatellite-market perspective, said SES is ?not sure we can discern a strategy[at Intelsat] yet. It obviously relates to the long-term plans of the currentprivate-equity holders.?

Bednarek said Intelsat is likely to conclude more dealssimilar to New Dawn, where a money-making satellite nearing retirement isreplaced through a partnership that permits Intelsat to avoid digging deeplyinto its own pockets.

New Dawn and IS-22, Bednarek said, are ?essentially someone else financing a replacement. ? I would expect that process ? anour-slots-your-money approach of financing either replacement satellites orfresh satellites ? to continue. We certainly haven?t anticipated themdisappearing from the market, by any stretch.?

BC Partners Holdings Ltd., Intelsat?s lead investor, hassaid it is willing to stick with the investment over the long term. IntelsatChief Executive David McGlade in recent months has said the company?s ownershave been willing to permit selected investments in growth opportunitiesdespite Intelsat?s large debt.

SES and Intelsat of Bermuda and Washington are by far theworld?s largest commercial satellite fleet operators, with market shares in 2008 of 25.1 percent and 24.7 percent, respectively, according to SESestimates.

SES assumes that the global market for Ku-band satellitecapacity will grow by 4.5 percent per year between now and 2016, while theC-band market will grow by 2.4 percent annually.

SES?s Astra2Connect service, which uses spare Ku-bandcapacity on two Astra satellites covering Europe, already has 40,000 subscribers and is growing by around 10,000 every three months.

Bausch said that even this healthy growth can be easilyaccommodated by existing SES satellites at 23.5 degrees east and 31.5 degreeseast.

?If we assume 12,000 subscribers per transponder, that?sthree transponders we need to add per year. We have this capacity.?

SES?s principal European competitor, Eutelsat of Paris, hasordered a large all-Ka-band satellite for launch in 2010 on the assumption thatSES is mistaken. Three companies in the United States are investing in Ka-bandcapacity to serve principally the consumer market.