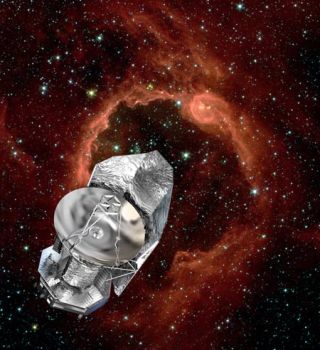 Artist impression of the Herschel spacecraft, which will an unprecedented view of the cold universe, bridging the gap between what can be observed in the infrared from the ground and earlier space missions of this kind.
(Image: © ESA – D. Ducros, 2009)

After itssuccessful launch into space last week, the Herschel Space Observatory used cellphone technology to call back home ? the first time the technology has beenused in spaceflight.

Herschel isthe largest, mostpowerful infrared telescope ever launched into space. It will makeobservations in the far-infrared to sub-millimeter wavelengths of light thatwill allow astronomers to study cold, dark dust clouds and possibly starformation in action.

At 12:00GMT (8:00 a.m. EST) on May 16 ? just under two days after launch ? Herschelswitched its telemetry downlink to "high rate mode" and begantransmitting, marking the first-ever use of Gaussian Minimum Shift Keying(GMSK) modulation in space. GMSK is commonly used in Global System for mobileCommunication (GSM) mobile phone networks due to its very efficient use ofbandwidth and power.

Duringtheir missions, the GMSK-based radio links will be used by both spacecraft totransfer data gathered by their scientific instruments and on-board subsystems,providing information on flight status and overall health.

The GSMstandard is the most popular modulation standard for mobile phone networks inthe world. According to the GSM Association, terrestrial GSM networks now covermore than 80% of the world's population in more than 212 countries andterritories ? and will soon extend some 1 million miles (1.5 million kilometers)further to the L2 Lagrange point (a gravitational stability point in thesun-Earth system), Herscheland Plank's final orbital destination.