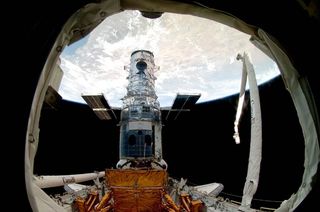 A wide view of the Hubble Space Telescope, locked down in the cargo bay of the Earth-orbiting space shuttle Atlantis on May 13, 2009 during the STS-125 mission - NASA's last ever service call to the space observatory.
(Image: © NASA.)

HOUSTON -Atlantis astronauts will say goodbye to the Hubble Space Telescope for the lasttime Tuesday.

The sevenastronauts aboard Atlantis will pluck the 19-year-old telescope from its perchin the shuttle cargo bay Tuesday morning and release it back into space. Theshuttle will then fire its engines to leave Hubble?s the 350-mile (563-km) highneighborhood for a lower orbit.

The movecaps nearly a week of intenseHubble repairs and five amazing spacewalks by Atlantis astronauts to addnew $220 million worth of new instruments and upgrades, as well asunprecedented repairs. By the end of their last spacewalk on Monday, they hadaccomplished all of their goals plus some extra work, leaving Hubble morepowerful than ever.

Altman andhis crew are due to return to Earth Friday and will tweak their orbit a bittoday to put them on course for an earlier landing in Florida.

Today,astronaut Megan McArthur will release Hubble using the robotic arm aboardAtlantis, but it was her crewmate John Grunsfeld - who is making his third tripto the observatory - who actually gave the telescope the lastpat farewell during the mission?s final spacewalk.

?Happyvoyages,? Grunsfeld said to Hubble during a lighthearted crew video on Monday.?It?s hard not to think of Hubble as something alive, but I really was thinkingof Hubble as a friend.?

Atlantis?trip to Hubble is NASA?s fifth and last, ever, service call to the spacetelescope before the agency retires its aging shuttle fleet next year. Theagency?s capsule-based replacement is smaller, lacking the robotic arm neededto snare Hubble and the shuttle?s 60-foot (20-meter) cargo bay to store largeinstrument replacements.

Theastronauts launched from the NASA's Florida spaceport on May 11, leaving its sister shipEndeavour atop a second launch pad, where it has stood ready to fly a rescuemission should Atlantis suffer irreparable damage during the mission. Theshuttle cannot reach the safe haven of the 220-mile (354-km) InternationalSpace Station from Hubble because it is higher and in a very different orbit.

NASA oncecanceled Atlantis? mission because of that risk following the Columbiadisaster, but later reinstated the mission with the caveat of having a rescueship ready to fly. The region around Hubble is littered with space trash andthe Atlantis crew inspected their shuttle?s heat shield soon after launch.

Missionmanagers found the shuttle in good health after its launch, with Atlantisastronauts to take a now-standard second look at their heat shield for signs ofnew damage while they have been in space.

By NASA?sscorecard, the flight has been an undeniable success despite daunting spacewalkrepairs that revived a pair of long-dead instruments. Their work should leave Hubblemore capable than ever to take its trademark cosmic images andpeer back to about 500 million years after the birth of the universe.

They alsoresurrected Hubble?s advanced camera and a versatile spectrograph that candouble as an imager. Those damaged devices were never built to be fixed inspace.

Now, all ofHubble?s instrument bays are full, something the telescope hasn?t seen since 1993when astronauts removed one to install corrective mirrors to fix thethen-ailing observatory?s blurry vision during the first service call. Threemore visits by astronauts then followed in 1997, 1999 and 2002 to steadilyupgrade the telescope.

?There arealready some bittersweet feelings,? Hubble program manager Preston Burch toldreporters Monday here at NASA?s Johnson Space Center. ?We?re extremely pleasedwith the success of the mission and happy. But on the other hand, we?re sadthat this will be the last time we see it.?

Jon Morse,chief of NASA?s astrophysics division, said that full performance checks forHubble?s new instruments should be completed by the end of summer. But already,thousands of scientists are waiting in line to use Hubble once the newinstrument system checks are completed at the end of the summer, he added.

?We have asaying in the science mission directorate, ?Science Never Sleeps,? and our workis just beginning,? said Jon Morse, chief of NASA?s astrophysics division. ?Wecan?t wait to get out there and use Hubble for its intended purposes.?