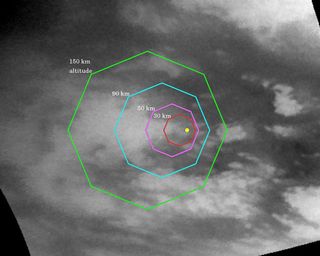 This map illustrates the planned imaging coverage for the NASA Descent Imager/Spectral Radiometer aboard ESA's Huygens probe during its descent toward Titan's surface on Jan. 14, 2005. The colored lines mark the observation area as the probe descends. The yellow dot is the planned landing zone.
(Image: © NASA/JPL.)

If successful, the 705-pound (320-kilogram) Huygens will be the most distant human-made object ever to land on an alien world. It's set to reach Titan early Jan. 14 EST.

ESA mission scientists and managers reported the probe on target and primed for its rendezvous during a last status briefing before the Titan descent held today at the space agency's spacecraft operations center (ESOC) in Darmstadt, Germany.

The mission manager for Europe's Huygens descent probe is part of a European team that has been working for 20 years on an event that will last no more than two hours on Jan. 14.

But Jean-Pierre Lebreton, the manager, said at a press briefing here at the ESA's ESOC mission control center that he is not nervous.

"I am confident we are going to live something very special tomorrow," Lebreton said.

The Huygens probe is expected to be awakened by an internal signal to be switched on at 11:42 p.m. EST (4:42 a.m. Jan. 14 GMT). NASA's Cassini satellite, from which Huygens separated in late December, will then orient itself toward Titan to prepare to pick up Huygens data.

An initial indication that Huygens entered Titan's atmosphere and deployed its primary parachute may be available from a signal picked up by the large Greenbank antenna in West Virginia at 5:30 a.m. EST (1030 GMT). But Lebreton said it will likely be not before 10:13 a.m. EST (1513 GMT) before scientists receive, via Cassini, the first of several data files indicating that Huygens had made the expected observations as it descends through Titan's atmosphere.

"It's a little satisfying to have been working on this from the beginning," said astronomer Martin Tomasko, of the University of Arizona's Lunar and Planetary Laboratory, in an earlier interview. "To be able to answer the questions we asked six or seven years ago, obviously it feels wonderful."

Tomasko, who is currently in Darmstadt and participated in the press briefing, leads the international team monitoring Huygens' only optical instrument - the Descent Imager/Spectral Radiometer (DISR).

Titan's mystery has long taunted astronomers hoping to understand the Saturnian satellite, the only moon in the Solar System with its own, thick atmosphere. Flush with nitrogen and at least 6 percent methane, Titan's hazy atmosphere is laden with organic compounds and researchers aren't sure what to expect when the surface comes into view.

"One of the major objectives with our camera is to understand the nature of the surface," Tomasko told SPACE.com. "Will we have drainage channels, or methane snow? Mission scientists are also unsure whether Huygens will land on a solid surface or a methane lake.

"It's really tantalizing, like looking through a veil," Tomasko said.

Cassini released the spring-loaded Huygens on Dec. 25, 2004. ESA officials studying Cassini's telemetry during the release maneuver said NASA's Saturn orbiter gave Huygens a good start for its solo flight. The ballistic probe should slam into Titan's atmosphere at about 13,500 miles an hour (22,000 kilometers an hour), deploy its parachute and begin observing the moon before touching down on the surface.

The process is entirely automated, with Huygens expected to broadcast its data to Cassini for later playback to Earth-based researchers.

"We really won't know anything until Cassini turns back toward Earth," Standley said, adding that during Huygens' descent, the Saturn orbiter will be facing toward Titan to receive the lander's data. "We're going to be playing that data back 16 times to be sure we get it all."

The $3.3 billion Cassini-Huygens mission launched in 1997 and reached  the Saturn system in June 2004. The mission is a joint effort by NASA, ESA and the Italian Space Agency.