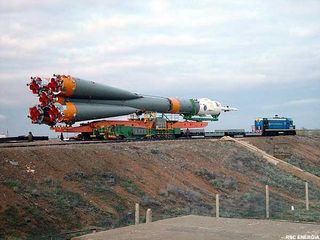 A Soyuz U rocket is rolled out to its Baikonur Cosmodrome launch pad in anticipation of an April 25, 2002 liftoff to the International Space Station.

A new study out of Russia says that children in some areas near Kazakhstan's Baikonur Cosmodrome are twice as likely to require medical attention as other children in the region.

According to an unpublished report, the cause of illness is believed to be highly toxic fuel from spent rocket stages that spills onto the sparsely population region. Baikonur is where Russia's space agency conducts a majority of its space launches. The report was revealed today in the journal Nature.

The announcement follows the release this week of a separate study of the risk here in the United States of perchlorate, a rocket-fuel component known to be health-threatening. The chemical has been found in the drinking water of at least 11 million U.S. residents. Traces of perchlorate have also been found in lettuce and milk.

The Russian study was done by Vector, the State Research Center of Virology and Biotechnology. The researchers examined health records from 1998 to 2000 of 1,000 children in two polluted areas, along with the records of 330 children in a nearby unpolluted area.

The study is controversial even before it has been officially released.

Baikonur is a significant revenue source for the Russian government, the journal notes, estimating that profit from a single commercial launch may be as high as $25 million. The spaceport is critical to NASA, too. It is the only place from which supplies and crews headed for the International Space Station can be lofted into orbit while the U.S. shuttle fleet is grounded. NASA and the European Space Agency (ESA) both contract with their Russian counterpart to use Baikonur.

The Russian government has rejected the results of the study while medical experts elsewhere say they have not had a chance to judge its validity.

While NASA's uses its Florida-based Cape Canaveral facility to launch rockets out over the sea rather than over populated areas, the United States is not free of Space Age contamination.

A study in 2003 found that lettuce grown in parts of the western United States were tainted with perchlorate, the main component of rocket fuel and missile propellant. It is in the drinking water of between 11 million and 20 million people in several states, various studies conclude.

Among contaminated sources is the Colorado River, which provides water to Los Angeles, Phoenix and Las Vegas and is used to irrigate 70 percent of the nation's lettuce crops, according to the Environmental Working Group, which performed the 2003 study in cooperation with scientists at Texas Tech University.

Most of the perchlorate in U.S. water comes from military bases or plants operated by federal defense contractors, the study's scientists said. Perchlorate is also a component of fireworks.

In excess quantities, perchlorate is thought to disrupt the production of hormones and, in fetuses, potentially cause mental retardation, loss of hearing and speech, and motor skill deficits. In adults, high doses can disrupt the function of the thyroid gland.

Another study by the Environmental Working Group found perchlorate levels in milk ranging from 1.7 to 6.4 parts per billion. The group has urged state and federal agencies to consider stricter procedures to measure and control the contamination.

A follow-up study in 2004 by the Food and Drug Administration (FDA) found traces of perchlorate in bottled water at retail stores, in milk across the country, and in lettuce tested in several states. FDA officials said there is no cause for alarm, and that further study was needed to determine just how toxic the chemical is.

"The scope of the data is too limited" for any conclusions to be drawn, according to an FDA statement, which advised: "Until more is known about the health effects of perchlorate and its occurrence in foods, FDA continues to recommend that consumers eat a balanced diet."

According to the Environmental Protection Agency (EPA), perchlorate is present in the drinking water of 11 million Americans at concentrations of 4 parts per billion or higher. In an effort to determine acceptable limits of perchlorate consumption, the EPA set a "daily reference dose" of 0.00003 milligrams per kilogram of body weight, which the agency said would correspond to a drinking-water concentration of 1 part per billion based on assumptions about body weight and daily water consumption.

An new study of perchlorate risk, just released by the National Academies' National Research Council (NRC) on Monday, suggests doses up to 20 times higher may be acceptable.

"Daily ingestion of up to 0.0007 milligrams per kilogram of body weight can occur without adversely affecting the health of even the most sensitive populations," the NRC report concludes.

The NRC researchers, scientists from various institutions and fields of expertise, drew on past studies in which patients have been administered perchlorate, ironically to treat thyroid conditions.

"A few patients had serious adverse reactions," the NRC states, but more recently "patients with hyperthyroidism have been treated effectively and safely with moderate doses of perchlorate for up to two years."

A perchlorate dose of more than 0.4 milligrams per kilogram per day would be required "to adversely affect thyroid hormone production and cause hypothyroidism," the study concludes. "However, the dose required to cause hypothyroidism in pregnant women, infants, children, and people with low iodide intake or pre-existing thyroid dysfunction might be lower."

Lauren Sucher, a spokesperson for the Environmental Working Group, said in a telephone interview today that the EPA will have to consider other factors in setting a drinking water standard, however. Babies, for example, are at higher risk due in part to their lower body weight.

"Once the EPA takes into account childrens' and babies' exposure to this rocket fuel component and figures in food exposure, they should reach a much lower drinking water standard," Sucher told SPACE.com.

Near Baikonur, a variety of illnesses were noted.

The level of some blood and endocrine, or gland disorders in polluted areas is more than twice the regional average. But experts outside Russia who have seen the study can't verify how the data was collected. "They say that although such results should be regarded with caution, given the sometimes disorganized state of the country's medical records, the problem deserves international attention," the journal states.

The study was led by epidemiologist Sergey Zykov, who said it confirms pollution fears raised by environmental groups. Zykov said Russian space agency officials had a "negative attitude" to studies from outside the agency. Another scientist who has campaigned against launches alleges to have been harassed by security officials, the journal article said.

There are other complexities.

Valerie Beral, an epidemiologist at Cancer Research UK in Oxford, said some studies of the 1986 Chernobyl nuclear accident produced conclusions that could not be replicated by other scientists. In some cases, Russian researchers have been accused of releasing alarming findings to attract funding from the West.

In an editorial, the journal said "ESA and NASA use Baikonur, but neither they nor the Russian administrators of the base seem overly concerned about the population." Further study is needed, the editorial urged, and ESA and NASA should contribute to financing it.