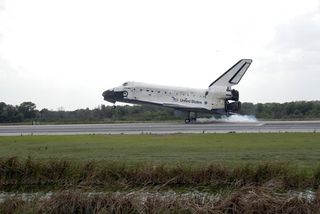 Space shuttle Discovery touches down on Runway 15 at NASA's Kennedy Space Center in Florida to complete the 13-day, 5.3-million mile journey on the STS-119 mission to the International Space Station on March 28, 2009.
(Image: © NASA/Kim Shiflett.)

With thesuccessful landing Saturday of the space shuttle Discovery, NASA is gearing upfor its next mission: Saving the Hubble Space Telescope.

As Discoverytouched down at NASA?s Kennedy Space Center in Florida to end a successfulmission to the International Space Station, engineers were priming its sistership Atlantis for a planned May 12 launch to overhaul Hubble in an 11-daymission fraught with risk.

?I thinkthe only thing that beats a beautiful orbiter landing like this is the nextlaunch,? said NASA?s deputy shuttle program manager Leroy Cain after Discoverylanded at the spaceport in Cape Canaveral, Fla. ?So we?re looking forward tothat as well.?

Atlantis ispoisedto roll out to its seaside Pad 39A launch site on Tuesday. A separate spaceshuttle, the Endeavour orbiter, is being prepared to serve as a rescue shipshould Atlantis suffer critical damage that would prevent the spacecraft fromsafely returning its seven-astronaut crew back to Earth.

In order toreach Hubble, Atlantis will fly in an orbit that has a higher than normal riskof orbital debris strikes for NASA shuttles, about a 1-in-185 chance. NASA?ssafety guidelines call for a maximum risk of a 1-in-200 chance, but officialssaid that they are weighing that risk against ways to offset it for the Hubbleflight. They are also studying the risk of new debris caused by the Feb. 10 crash of two satellites in an orbit above Hubble's.

?We havesome more discussions to have in terms of mitigations that we already plan toput in place and some other things that we might consider,? Cain said.

Commandedby veteran spaceflyer Scott Altman, Atlantis? STS-125mission to Hubble is expected to extend the iconic orbital observatory?slifespan through at least 2013 or later. Astronauts plan to perform fiveback-to-back spacewalks to add a new camera, replace gyroscopes and batteries,add a docking ring, as well as perform tricky repairs on equipment that wasnever designed to be fixed in space.

The missionhas been delayed since October 2008, when a part on Hubble unexpectedly failed,prompting engineers to begin assembly a spare and add the new repair to theupcoming mission. It is the fifth and last service call on Hubble by shuttleastronauts.

The extralaunch pad and shuttle are required because Atlantis and its crew of sevenastronauts would not be able to seek refuge aboard the International SpaceStation if their spacecraft suffered critical damage and could not return toEarth. The Hubble Space Telescope flies in a higher and different orbit thanthe station, so Atlantis would not be able to reach the outpost, NASA has said.

The stationcan serve as a safe haven for shuttle missions like Discovery?s STS-119 flight,which boosted the outpost to full power by delivering its final solar arrays,since the orbiters can return to the outpost after undocking if required.

NASA wasinitially considering using a single launch pad, Pad 39A, to launch Atlantis,as well as its rescue ship - if needed - in order to allow extra time formodifications to Pad 39B. That pad is being converted to launch NASA?s new AresI rocket and Orion spacecraft, with the first testflight Ares I-X slated for July.

?We thinkit?s more of a normal plan to have the orbiter out at the pad,? Gerstenmaiersaid. ?It gives us a little bit more robustness from a crew standpoint.?

Using bothlaunch pads will likely mean a few weeks of delay for the Ares I-X launch test,which was slated for July 11, Gerstenmaier said.

Endeavouris currently expected to move from its processing hangar to NASA?s cavernousVehicle Assembly Building on April 10 to meet its external fuel tank and twinsolid rocket boosters, NASA officials said. That shuttle would then roll out tothe second launch pad on April 17, they added.

NASA plansto launch up to nine more shuttle missions before retiring its three-orbiterfleet in 2010.

One missionis reserved to upgrade Hubble in May, while the others are aimed atcompleting the International Space Station and, if funding is available, deliveringthe $1.5 billion Alpha Magnetic Spectrometer (AMS) physics experiment to theorbiting lab, Gerstenmaier said.