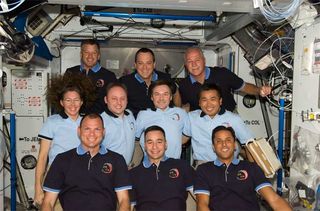 The joint STS-119 and Expedition 18 crewmembers pose for a group photo following a joint news conference in the Harmony node of the International Space Station while Space Shuttle Discovery remains docked with the station in March 2009.
(Image: © NASA.)

The Thursday launch of a Russian Soyuz spacecraft carrying the world's first repeat space tourist and a new crew for the International Space Station has boosted the population of space to its historical max: 13 people.

The population boom ties the record for the maximum number of people in space at the same time. It is relatively rare but could become more commonplace once the space station shifts to a larger, six-person crew in late May.

"This is the highest that we've seen," NASA spokesperson Nicole Cloutier-Lemasters told SPACE.com Friday from the Johnson Space Center in Houston.

Here's the baker's dozen breakdown of the three spaceships in orbit today:

The first time 13 people flew in space was March 1995, when two Russians and an American launched on a Soyuz, joining three cosmonauts aboard the Mir Space Station and seven astronauts on space shuttle Endeavour, which was in orbit on a separate mission, according to collectSPACE.com, a SPACE.compartner.

The last time the space population surpassed 10 astronauts was in 2006 during NASA's STS-115 mission, when the shuttle Atlantis was headed home. Three spaceflyers were aboard the station and three more were en route to the outpost aboard a Soyuz.

But that traffic jam fell short of the maximum. Atlantis carried a crew of six astronauts, with the orbital population topping out at 12. Those three spacecraft shared a rare ship-to-ship phone call before Atlantis landed.

The current party breaks up soon.

Discovery is due to land tomorrow on a runway at NASA's Kennedy Space Center in Cape Canaveral, Fla., at 1:38 p.m. EDT (1738 GMT) to end a mission that delivered a new crewmember and final solar arrays to the space station.