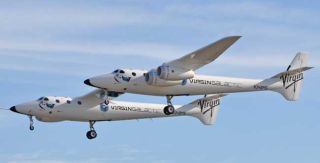 WhiteKnightTwo took to the air for the first time Sunday morning, Dec. 21, 2008 following several weeks of taxi tests. The big, twin fuselage airplane took off at 8:17 a.m. PST and landed an hour later to the applause of spectators watching at the Mojave Air and Spaceport.
(Image: © Bill Deaver/Mojave Desert News)

This year closed with a volley of seemingly hopeful signs for what's termed by some as "NewSpace" — an entrepreneurial spaceflight trajectory markedly different than NASA and its cabal of mainstream aerospace contractors.

Item: The huge WhiteKnightTwo mothership successfully lifts off into aerodynamic adulation at the Mojave Air and Space Port, that it can serve as a carrier plane to support two-pilot, six passenger suborbital SpaceShipTwo tourist operations for spaceliner operator, Virgin Galactic.

Item: XCOR Aerospace of Mojave, Calif. successfully completed its first test fire of the rocket engine designed to power its two-seat Lynx suborbital vehicle to the edge of space. Meanwhile, Jules Klar of RocketShip Tours has announced that his company is selling rides to the edge of space on Lynx for $95,000 per flight.

Item: Bigelow Aerospace of North Las Vegas continued to monitor though the year its Genesis 1 and Genesis 2 modules placed into orbit July 2006 and June 2007. Both spacecraft remain in excellent shape, with the private firm pushing forward on larger expandable structures that can become habitable havens in Earth orbit.

It's the economy $tupid

But one big issue looms for NewSpace next year, said Jeff Foust, an aerospace analyst, journalist and publisher, as well as editor and publisher of the respected website, The Space Review. And that topic of trepidation is the state of the economy.

"This is going to affect companies in the industry in two ways.  One, it's going to make it that much more difficult for companies to raise the money needed to develop their vehicles," Foust told SPACE.com.

"It won't directly affect companies that are already self-funded or otherwise fully-funded — like Virgin Galactic, SpaceX, Armadillo Aerospace, Bigelow Aerospace, etc. — but those  companies trying to raise tens of millions of dollars or more  to carry out their business plans will find that steep path to funding  has become even steeper.

Foust also noted another impact tied to the rocky economy — a potential reduction in customer demand, particularly in space tourism. A whiplash from the continuation of a deep recession in 2009, he said, may well be people reconsidering tossing out $95,000 to $200,000 or more for suborbital jaunts, or putting the trip off a few years — to a time when, presumably, the economy recovers.

In his crystal ball gazing, Foust said he expects that the coming year will be a year more of incremental advances rather than breakthroughs in the NewSpace field.

"In short, I think commercial space will continue to have strong long-term prospects, but that 2009 will present its share of challenges for the industry to overcome in order to realize those prospects," Foust said.

Another "X factor" for commercial space in 2009 that Foust flagged is the incoming Obama administration.

"During the general election, the Obama campaign made some positive statements about the importance of commercial space, especially in the campaign's space policy issued in August. However, we'll have to wait and see how exactly they will implement that — and what priority commercial space issues will get among other pressing space policy issues, not to mention overall policy," Foust observed.

Taking a longing look at the economic uncertainty of the times is David Livingston, host of The Space Show — a home for a bubbling cauldron of space experts that fill the sound waves with talk radio and a streaming program of both solution and worry.

"Concerning my civil and private space expectations for 2009, about all I can say at this time is to expect the unexpected," Livingston said. "With the economy and markets in flux, with Congress doing its best to spread fear, and with tight money, I suspect capital acquisition efforts on the parts of some private companies may find the going to be tough," he said.

Livingston said that he is expecting the unexpected for most - if not all of 2009.

"Too much is unknown or uncertain at this time to be sure of anything. By the way, markets and money hate uncertainty. We need to get through this mess, start our recovery, or at least stop with the fear propagation by members of Congress and the press — and we need to see or at least reliably anticipate stability returning to the financial and economic world," Livingston concluded.

An ongoing success story in private space matters is that of John Carmack, chief rocketeer of his Armadillo Aerospace team in Rockwall, Texas. Last October, Armadillo bagged $350,000 in prize money for winning Level One of the Northrop Grumman Lunar Lander Challenge in Las Cruces, New Mexico.

Furthermore, "we are planning on doing 'boosted hops' up to around a mile or so at our home base airfield once the new [Federal Aviation Administration] amateur rocket regulations go into effect in February," Carmack added. "We will be testing higher speeds going up and down, and eventually trying an engine relight after a short descent under drogue [parachute]."

In other Armadillo rocket milestones, Carmack said that they should be doing exhibition races with multiple Rocket Racers. Also, he advised that a skydiver will ride and jump off from one of the company's rockets.

"I hope to be flying at [New Mexico's] Spaceport America later next year, which will give us supersonic flights and get close to space — but that is contingent on a few other factors," Carmack told SPACE.com.

Jeff Greason is head of XCOR Aerospace in Mojave, California — a leading private entrepreneurial space group with an eye on the suborbital space market. In putting a business-eye on the coming year, he signals a time for patience.

"During 2009, entrepreneurial space companies will continue working on their propulsion systems, airframes, and all the other components necessary for successful access to space," Greason explained. "So we will see engine tests, other subsystem tests, and progress on vehicle construction and system integration."

But given all that activity, Greason added: "We're unlikely to see any new systems enter service in 2009. People should not find this disappointing. This is the hard work that is necessary to make affordable spaceflight a reality, and it will lead to first flights in 2010."

Spotlighting that next year will likely become the "tipping" point in the emerging personal space flight industry is Stuart Witt, general manager of Mojave Air and Space Port in California.

Witt's end of the year message is straightforward: The industry has an opportunity to expand to many locations across the nation if operators are successful at Mojave.

"The business of being first in new and exciting endeavors has its risks, but thank goodness we have people willing to be creative and take the personal and business risks which have such a positive effect on so many," Witt feels.

Witt contends that what's needed is creativity, innovation and a long reach — all which has been missing from national space policy for decades.

"As America focuses on bailing out everyone who is on the brink of failure, thank God we have places where failure is still an option in order for innovation to be realized," Witt believes. "When you strip away a country's or individual's ability to fail you take away their right to succeed. Let the natural forces of accountability work for all."