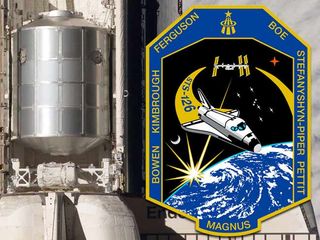 The STS-126 patch (right) borrows it's shape from the mission's payload canister, the Multi-Purpose Logistics Module, or MPLM.
(Image: © NASA/collectSPACE.com.)

Look tooclosely at the STS-126 mission patch and you might miss it. The crew emblem,which depicts space shuttle Endeavour on its way back from the InternationalSpace Station (ISS) - a scene that will be played out for real on Sunday shouldthe current schedule and weather hold - also symbolizes the flight's primarypayload.

You justhave to step back to see it.

"Wouldn'tit be neat if our patch is shaped like an MPLM, which is what we're carrying upas our cargo?" pilot Eric Boe recalled during an interviewwith collectSPACE.com of his query when he led his crewmatesthrough developing their patch design.

Greatindeed, as well as unique: while past patches have taken on the shape of theirpayloads or other astronaut equipment, the MPLM - Multi-Purpose LogisticsModule - outline is new, even though the moving van-like module has flown eighttimes since 2001.

STS-126'sMPLM, dubbed "Leonardo", was modified prior to space shuttleEndeavour's launch to accommodate the heaviest payload yet, some 14,400 poundsof equipment and supplies for the ISS, including new crew quarters, a newtoilet, a new galley and a water recovery system that will recyclethe station crew's urine.

Twelve daysinto the 16-day flight, Boe and his crew mates have completely unpackedLeonardo and are in the process of re-packing it with supplies to be returnedto the ground, bringing us back to the scene shown within the MPLM-shapedpatch.

The ideafor the insignia's design evolved as Boe worked with two artists who initiallycontacted the crew with some concepts of their own.

"Whatthey did," described Boe, "is helped us bring some ideas togethervery quickly."

"Webegan e-mailing each other back then and he said this was always something hewanted to do, too," said Gagnon. "You always hope another opportunityis going to come up, but you never know. When Eric contacted me, I e-mailedJorge and said, 'This is what the mission is about, why don't you throwsomething together and I'll send it in.'"

Cartesaccepted Gagnon's offer and in doing, introduced the idea of an MPLM-shapedpatch.

"Ilike circular patches but I wanted to be original, so I sketched a rounded ovaland I pictured the MPLM," said Cartes.

Cartes drewhis MPLM lying on its side. The crew liked the idea but put its own 'spin' onit.

"The crewwas the ones who suggested turning the patch vertical," shared Gagnon.Their reasons were two-fold.

"Theywanted to get the ISS crew member's name onto the patch but without having atab as with prior patches," Gagnon explained. Earlier insignia attached atab to the bottom of the patch with the name of the astronaut riding with thecrew to serve aboard the ISS. For the STS-126 crew, that was to be Expedition18 flight engineer Sandra Magnus.

"Oneof the other challenges is getting all the names onto the patch," observedBoe.

Most of theastronauts' names, like Boe's, are short. The commander is Chris Ferguson andmission specialists include Steve Bowen, Shane Kimbrough and Don Pettit.

Theemblem's other elements fell into place more easily. The white and red starswere adapted from Gagnon's first proposal to the crew.

"Orionon the patch is showing our future, where we are going next. There is a redstar representing Mars," stated Boe.

The rising sunwas at the suggestion of the commander, in a reference to his previousspaceflight.

"Therays of the sun were a contribution from Ferguson," Gagnon described."He wanted the rays exploding over the horizon, pretty much like they didon the 115patch."

Ultimatelythe experience designing the patch, which took about two and a half months inlate 2007, was enjoyable for all involved.

"Itwas interesting having them help us out making some of the choices,"praised Boe of Gagnon and Cartes. From their perspective, the patch capturedtheir excitement to have a hand in its creation.

"Ilove this patch, and I think it has a nice combination of colors and ideas forthe present mission and for the future of the human exploration of space,"expressed Cartes.

And as muchas they were looking forward to seeing it in space, they are also eager to seeits return from orbit.

"Iasked the crew to fly patches for us, but I don't know if they did,"revealed Gagnon. "I hope they did."