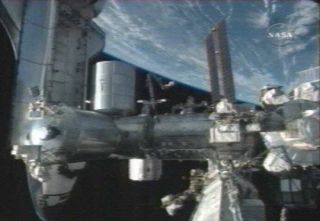 The space shuttle Endeavour is seen docked at the International Space Station in this still from a video camera outside the station on Nov. 18, 2008 during the STS-126 mission.
(Image: © NASA TV.)

A crack teamof astronaut plumbers got down to business aboard the International SpaceStation on Wednesday to hook up a new system that recycles urine into drinkingwater.

The newgear is part of a bounty of lifesupport equipment delivered to the space station this week aboard NASA?sshuttle Endeavour to prime the orbital research outpost to double its currentthree-astronaut population next year.

Endeavour launchedtoward the station last Friday and docked two days later. Since then,astronauts have swapped out one member of the station?s crew, performed thefirst of four complicated spacewalks and amazed Mission Control by the speed atwhich they unpacked a new kitchen, bathroom, exercise equipment and the waterrecycling system.

Twocloset-like sleeping quarters were up next to transform the station from athree-bedroom, one-bath home into a five-bedroom, two-bath research outpostwith two galleys, a gym and the luxury of a space food fridge.

Today,astronauts are expected to hook up two refrigerator-sized racks of equipmentthat, when combined, make up the space station?s $250 million water recoverysystem.

They?llalso prepare for the mission?s second spacewalk on Thursday - the 10thanniversary of the space station. Mission controllers have been working toreplan the upcoming spacewalks after a spacewalkerlost a bag filled with grease guns and other specialized tools during thefirst spacewalk on Tuesday.

Thestation?s waterrecovery equipment is part of NASA?s attempt at a functional closed loopenvironmental system in space. If it works as designed, it should cut the needto deliver about 15,000 pounds (6,803 kg) of water to the station per year,mission managers have said.

It collectsastronaut urine, wastewater and sweat condensed from the station?s atmosphereand recycles it through a seven-filter process to recover and purify about 93percent of the initial water. That water can then be used for drinking, foodpreparation, bathing or oxygen generation via electrolysis. NASA?s partnerOxygen Generation System is already aboard the space station.

Endeavourmission specialist Don Pettit, who lived aboard the station for 5 1/2 months ona previous flight, has called the water recycling system a souped-upcoffeemaker because it ?takes today?s coffee and turns it into tomorrow?scoffee.?

Kerricksaid that once plumbing connections are made and a myriad of small parts areinstalled, shuttle and space station astronauts are expected to test thesystem?s water processing works only.

Pipingactual urine, donated from the space station?s three-astronaut Expedition 18crew before Endeavour launched Nov. 14, into the system will wait untilThursday. It takes about two days to get the water recovery system up andrunning.

Barring anyunexpected glitches, the first samples of water recycled from astronaut urineare not expected until early next week. But even then, more testing - about threemonths? worth - will be required before astronauts can put the recycled waterto the taste test.

?We are notpartaking of the samples,? Kerrick said. ?We are taking the samples andbringing them home for analysis, and performing onboard analysis.?

Kerricksaid the 10 astronauts aboard the station are so far ahead of their cargotransfer schedule, they will likely be able to activate and take samples from anew portable water dispenser - also delivered by Endeavour - early next weekwithout requiring the space shuttle extend its planned 15-day mission by anextra day.

?We?relooking to give them a free pass,? Kerrick said.

Endeavour initiallylaunched to the station with 105 hours of cargo transfer work for its crew andonly 98 hours available to do it. But the fast-working astronauts have made upthat needed time plus more to spare, mission managers said.

?That is absolutely fantastic news,? Ferguson told NASA?s shuttleMission Control in Houston late Tuesday. ?I know it weighs on all of us a little bit until thefinal word comes but that is just very welcome news. I think we?ll all rest alittle bit easier tonight.?

Endeavourastronauts will still perform the now standard late inspection of Endeavour?sheat shield to hunt for new damage caused after the previous two surveys. NASAhas kept close watch on shuttle heat shield health since wing damage led to theloss of the shuttle Columbia and its astronaut crew in 2003.