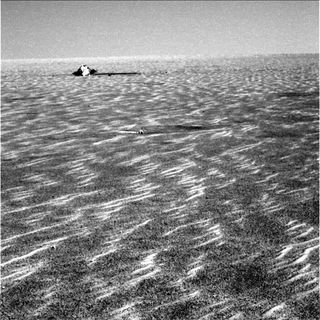 The Opportunity Mars rover has turned into a junkyard dog,prowling ever closer to a hunk of space litter at Meridiani Planum -- a discardedheat shield.

Duringits January 25 plunge toward the red planet, the Opportunityrover was encapsulated in a protective aeroshell comprised of two key parts: aheat shield and a backshell that contained essential landing gear.

Aftertaking the brunt of atmospheric friction, the heat shield was jettisoned high aboveMars. The hardware fell several miles before hitting the Meridiani Planumlandscape at a smashing speed.

Freshfrom exploring the remarkable Endurance Crater, the Opportunity rover is nowrolling toward the beat up heat shield that's been sitting on Mars for nearly11 months.

"For thescientists, it may be a chance to look at the deepest fresh hole in the groundthat we'll ever see on Mars. For the engineers, it's an unprecedented chance tosee how a heat shield performed during entry through the martianatmosphere. There's something for everybody," Squyres told SPACE.com.

As therobot wheels across the martian ponderosa that isMeridiani Planum, its Panoramic Camera (Pancam) has begunsnapping clearer and clearer images of the distant heat shield. The Pancam is ahigh-resolution color stereo pair of CCD cameras located on a camera bar thatsits on top of the mast of the rover.

Furthermore,there is discussion about making more than a drive-by camera shooting of therefuse -- perhaps using the robot's microscopic imager (MI) to examine the spentheat shield up-close and personal.

"We'll definitely do a lot of careful imaging with Pancam. We will use the MIonly if we find that it's safe and productive to do so. Stay tuned," Squyresadded.

What happened during entry andimpact?

Both en route to and wheel stop at the spacecraft part, there's good science ahead, saidRayArvidson, an Earth and planetary sciences expert at WashingtonUniversity in St. Louis, Missouri,and deputy principal investigator for the Mars Exploration Rover instruments.

"The heatshield campaign is focused on an inventory of the heat shield and itscomponents, including analyses of what happened during entry and impact,"Arvidson told SPACE.com.

Arvidson saidthat along the way to and by the shield, Opportunityscientists will be conducting observations aimed at understanding themechanical properties of the surface, based on excavations during the impact.

"We arealso interested in looking at the soils and rocks exposed during impact andmaking imaging and other measurements of these materials. This latter set ofexperiments will allow us to probe subsurface characteristics," Arvidsonexplained.

Spacecraftengineers are keen on making the first-ever inspection of a heat shield thatpenetrated Mars' atmosphere.

The blunt-nosed cone of a heatshield was covered with a layer of phenolic honeycomb. A phenolic compound ismade from benzene and is typically used in various plastics, disinfectants, andpharmaceuticals. This phenolic honeycomb is filled with an ablative material --also called an ablator -- which dissipates heat generated by atmosphericfriction.

Theablator itself is a unique blend of cork wood, binder and many tiny silicaglass spheres. The heat shield hasa thick, one-half inch (12.7 millimeter) layer of the ablator.

Images taken by Opportunitymight reveal how well the protective shield withstood the atmospheric fireworksit encountered in slicing through Mars' atmosphere, as well as yield dataleading to better heat shield designs.