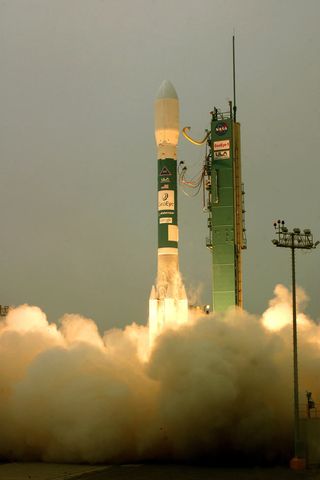 A United Launch Alliance Delta II rocket, on behalf of Boeing Launch Services, blasts off today at 11:50.57 a.m. PDT with the GeoEye-1 satellite from Space Launch Complex-2 at Vandenberg Air Force Base, Calif. The successful launch concluded approximately 75 minutes later with signal acquisition from the satellite in its proper orbit. Photo by Carleton Bailie, The Boeing Company/GeoEye

The actionwas taken by members the House and Senate appropriations committees in theclassified annex to a massive U.S. bill funding government activities, includingdefense, for 2009, according to Michael Birmingham, spokesman for theOffice of the Director of National Intelligence (ODNI).

The BroadArea Space-based Imagery Collector, or BASIC, program was approved by theDepartment of Defense and ODNI earlier thisyear, with a first launch scheduled for 2012 or 2013. The program has beenthe subject of controversy from the start due both to differences between themilitary and intelligence community about the acquisition strategy and toquestions about its compliance with presidential policy.

That policydirects U.S. government agencies, including the national security community, torely to the maximum practical extent on commercial providers for satelliteimagery. Two such providers, DigitalGlobe of Longmont, Colo., and GeoEye ofDulles, Va., count the U.S. government as their biggest single customer; both recentlylaunched satellites built with funding assistance from the U.S. NationalGeospatial-Intelligence Agency that are capable of distinguishing groundfeatures half a meter across or even smaller.

The BASICplan calls for the U.S. National Reconnaissance Office to procure twosatellites comparable to those operated by DigitalGlobe and GeoEye, withimaging apertures 1.1 meters across. The satellites, expected to cost $1.7billion, would be funded by the military intelligence budget, with the Pentagonhaving primary responsibility for acquisition decisions.

The BASICground segment would be funded by the National Geospatial-Intelligence Agencyusing national intelligence program funding. The ODNI and Pentagon sharedecision-making responsibility for that segment of the program.

News thatCongress had declined to fund the program was first reported by the AssociatedPress.