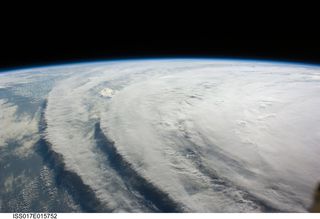 This picture of Hurricane Ike was downlinked by the crew of the International Space Station on September 10, 2008. Houston mission control evacuations have forced NASA and Russian officials to delay the docking of a Progress cargo ship with the space station.
(Image: © NASA)

NASA started what will be aslow recovery from Hurricane Ike at the Houston home of Mission Control onSunday, one likely to trigger delays in the agency's next two shuttle flights.

Johnson Space Center willremain closed until next week while a relatively small NASA and contractorrecovery team restores power and other utilities around the center.

Surrounding communitiesalso will be struggling to recover from a monster storm that left Houstonwithout power and prompted a weeklong curfew between 9 p.m. and 6 a.m. to keeppeople off swamped roadways.

"There are a lot ofthings around the center that need to be shored up before we can welcome backthe work force," NASA spokesman Mike Curie said.

JSC employs 15,000-12,000of them contractors and 3,000 civil servants. Many live in surroundingcommunities and still cannot return to homes they evacuated.

The small city of Seabrookjust outside the gates to JSC was likened to a disaster area with no power, nosewer service and no passable roadways. The mayor of the town ordered safetyofficials to turn away residents attempting to return home, according to AssociatedPress reports.

At the space center, a65-member "ride-out crew" began mopping up after the roof of Building30 - which houses the Mission Control Center - was damaged during the storm.The team started clearing debris and restoring power at buildings on a prioritybasis.

Water is standing in someareas at the center, particularly those closest to Clear Lake, a large body ofwater that connects to Galveston Bay three miles from JSC. The ability to pumpwater depends on the restoration of power in surrounding municipalities.

The weekend shutdown at JSCwill make it difficult to maintain an already tight schedule for the plannedOct. 10 launch of shuttle Atlantis on a HubbleSpace Telescope servicing mission and the Nov.12 launch of Endeavour on an International Space Station outfitting flight.

Astronaut and flightcontroller training for both missions will be stalled until JSC is reopened fornormal operations.

The Endeavour flight facesa Nov. 25 launch deadline. The sun angle on the station from Nov. 26 throughDec. 17 will be such that the outpost would not be able to generate enoughpower, or dispel enough heat, to support a docked shuttle mission.

NASA also would opt not tofly during the Christmas and New Year's holidays, so a delay beyond Nov. 25likely would push the Endeavour mission to early next year.

NASA activated backup spacestation Mission Control Centers near Austin, Texas, and Huntsville, Ala., onThursday, the day the center closed in advance of the storm. The backup centershave limited command-and-control capabilities, so a robotic Russian cargocarrier launched last Wednesday is loitering in orbit near the station.