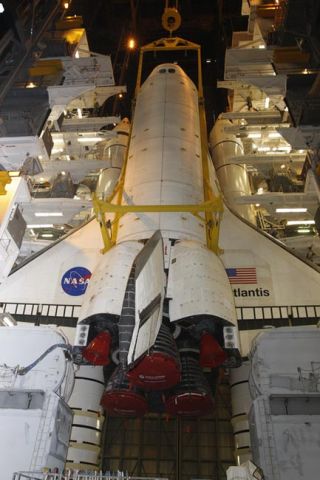 NASA isholding off on moving the space shuttle Atlantis to its Florida launch pad thisweek to ensure it is not threatened by Tropical Storm Hanna, the agency saidTuesday.

While theshuttle could make the 3-mile (4.8-km) trek to the seaside launch pad as earlyas Thursday, it?s more likely to move on Saturday after Hanna has passed, saidNASA spokesperson Allard Beutel of the Kennedy SpaceCenter (KSC) in Cape Canaveral, Fla.

?We?rewatching and protecting our options,? Beutel told SPACE.com.?I think we?re all pretty much figuring it will be Saturday.?

Shuttleworkers at KSC had initially planned to move Atlantis to Launch Pad 39A earlyMonday but held off a day to monitor Hanna, which as of Tuesday had weakened backto a tropical storm after reaching hurricane status over the weekend. NASAhoped to attempt the shuttle move early Wednesday, but later shifted to noearlier than Thursday at 12:01 a.m. EDT (0401 GMT) with Saturday a more likelytarget.

Until Hannapasses, Atlantis and its attached external fuel tank and solid rocket boosterswill stay in the shelter of NASA?s 52-Vehicle Assembly Building at thespaceport.

As of 2:00p.m. EDT (1900 GMT) Tuesday, Hanna was headed for the southeastern Bahamas withmaximum sustained winds of about 70 mph (110 kph) andhigher gusts, according to a National Hurricane Center status report. The stormis expected to strengthen over Wednesday and Thursday, with current forecastspredicting it to move northwest off the eastern coastof Florida.

NASA istargeting an Oct. 8 launch for Atlantis and a crew of seven astronauts to payone last service call on the Hubble Space Telescope.

Beutelsaid today that the spaceport was operating at Hurricane Condition Four, thecenter?s lowest alert level, to secure loose debris in anticipation of windspeeds reaching 50 knots (58 mph) in the next 72 hours.

Atlantis?October spaceflight is the fourth of five NASA shuttle flights planned for2008. The year?s final scheduled mission, a planned Nov. 10 launch aboardEndeavour to deliver supplies and equipment to the International Space Station,must fly before Nov. 25, when NASA would stand down due to unfavorable lighting andheating concerns at the orbiting outpost, agency officials have said.