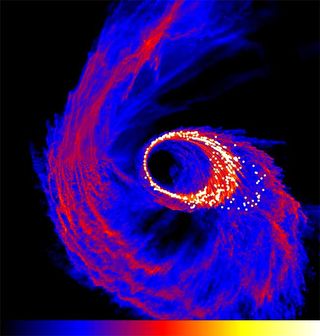 Deep in the center of our galaxy, circling suspiciouslyclose to the giant black hole lurking there, is a group of massive stars.

Now scientists have designed a model that shows for thefirst time how these stars might have formed in such an extreme environment.

Astronomers have long puzzled how these massive stars cameto be in the vicinity of a hugeblack hole. They couldn't have formed as most stars do, from a tenuouscloud of gas, because this cloud would have been ripped apart by the savagegravitational forces from the black hole nearby.

One guess was that the stars originally formed elsewhere as a clusterand later spiraled inward. But no trace has been found of the trail of stars thisprocess would have left behind.

Now Ian Bonnell, an astronomer at the University of StAndrews in Scotland, and William Ken Rice of the University of Edinburgh have createda computer simulation that offers a possible explanation for how the starscould have formed. They detailed their model in the Aug. 22 issue of thejournal Science.

In their model, a giant gas cloud plunges in toward theblack hole. As it gets close, much of the cloud is ripped apart by the blackhole's gravity, though some portion of it survives because of the turbulence ofthe gas in the cloud.

This remnant forms an oval disk of gas orbiting around theblack hole, gravitationally bound but beyond the range within which it would besucked in. Variations in the density of the material in the disk then cause itto condense into stars and break up, leaving the stars in an oval orbit aroundthe black hole where the disk used to be.

?"We've been trying to see how we could bridge the gapbetween normal star formation and star formation in this kind ofenvironment," Bonnell told SPACE.com. "The mechanism we presentshould be able to provide a variety of possible properties which willdefinitely encompass the ones we observe in our galaxy."

Though the researchers found a way that the stars near ourgalaxy's central black hole could have formed, the simulation is notproof that this is what happened.

"As satisfying as the new results are, the case fordisk fragmentation as the origin for the disk stars remains unproven,"wrote astronomer Philip Armitage of University of Colorado, Boulder, in anaccompanying commentary article in the same issue of Science. "Wedo not know whether the initial conditions assumed by Bonnell and Rice arerealized in the galactic center."

Bonnell agreed that the next step would be to try to determinehow probable their proposed scenario is compared to other suggestions for howthe stars formed.

"What we need to do next is to worry about thelikelihood of these other events happening," Bonnell said. "For theprocess we've outlined, the probability is high enough that it has a realchance of happening. I don't think it's anything that will prove to be thatcontroversial in the long run. I have a feeling it seems quite likely."

The scientists are also interested in whether this processmay have occurred in other galaxies. It is difficult to study the centralregions of other galaxies because they are so far away, but it could be thatthis type of star formation is widespread in the universe, Bonnell said.

"Supermassive black holes like the one in our galacticcenter are fairly common in galaxies," he said, "though our blackhole is not as big as the black holes in other galaxies, which could bethousands of times more massive."