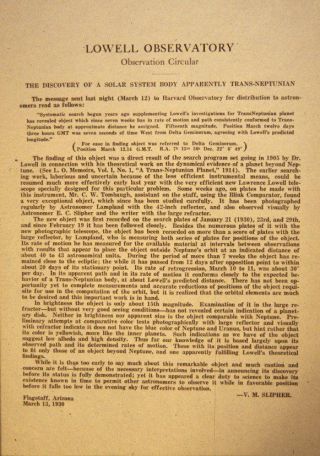 The word"planet" has meant many different things over the millennia and evenstill its definition is evolving.

The word istypically traced back to the ancient Greeks, who believed the Earth wasstationary at the center of the universe while objects in the sky revolvedaround it. The Greek term asters planetai mean "wanderingstars" and described the tiny lights that moved across the sky moredramatically than stars when compared over weeks and months. These wanderingstars, back then, amounted to Mercury, Venus, Mars, Jupiter and Saturn.

Some thinkthe Greeks and Romans of ancient times considered the sun and Earth's moon asplanets. An Elizabethan-era stage play and comedy published in 1597, called"The Woman in the Moon," depicted thesolar system with seven planets, including Saturn, Jupiter, Mars, Mercury,Venus, Sol (the sun) and Luna (the moon).??

NicolausCopernicus, in 1543, published his mathematical evidence of a heliocentricuniverse where the six planets revolved around the sun.

Only sixplanets, including Earth, were known until the 18th Century. In 1781, SirWilliam Herschel discovered Uranus in that he determined the point of light wasa planet and not another star as it had been considered until then.

As planetaryscientists and astronomers probe the solar system and beyond, with loads of newdiscoveries, this idea of a planet has changed and along with it celestialbodies either get thrown onto or off the planet list.

For instance,when Plutowas discovered by Clyde Tombaugh, the icy world seemed to be the king ofits neighborhood with no other similar-sized objects in sight. That all changedin 1992 when the first Kuiper Belt Object was found, with currently more than1,000 such icy bodies spotted in a disk-shaped region beyond the orbit ofNeptune, including some around the same size as Pluto. The discovery bringscontext to Pluto, leading some astronomers to contend Pluto looked more like aKuiper Belt Object than a planet.

In 2006, theInternational Astronomical Union (IAU) issued a formal definition of planet,one that led to Pluto's boot from planethood.

The IAUprovided three criteria an object must meet to reachplanet status:

A planet is acelestial body that

2. It has?sufficient mass for its self-gravity to overcome rigid body forces so that itassumes a hydrostatic equilibrium (nearly round) shape, and

3. It hascleared the neighborhood around its orbit.

Severalproblems with this definition immediately pop up for astronomers.

Under the IAUcriteria, the more than 300 extrasolar planets identified to date would not beconsidered planets.

"Thereis no acceptable planet definition for exoplanets," said Sara Seager, anastrophysicist at MIT. The current IAU planet definition necessitates a planetmust orbit the sun. Well, an exoplanet, has its own host star and it's not thesun.

Seager joinedother astronomers and planetary scientists last week at the Johns HopkinsUniversity Applied Physics Laboratory (APL) in Laurel, Md., for "The GreatPlanet Debate: Science as Process" conference. The argued about Pluto'sstatus and also discussed worlds beyond our solar system.

The problems,it turns out, are small and big.

Severalobjects not currently called exoplanetssit along the upper-limit mass cutoff of 13 Jupiter masses, beyond whichobjects are typically thought to be a class of failed star called brown dwarf. Butthese borderline objects could go either way, and Seager said a definition mustaccount for them.

The"cleared the neighborhood around its orbit" criterion is also asticky issue. That's because the farther away a planetary object is from itsstar the longer it takes to complete its orbit. So depending on the age of thesystem, that object may not have completed many orbits and thus If Earth werepositioned at a distance of 100 astronomical units (100 times farther than itis now), ?our homebase would not fit the IAU definition of a planet, argueHal Levison of the Southwest Research Institute in Boulder, Colo., and others.

The differentplanet definitions put forth at last week's meeting could leave the solarsystem with as few as eight planets or as manyas 13, with the possibility of many more lurking out there yet to bediscovered.

Two flavorsof definitions include the so-called dynamical definition and the geophysicalone. For the dynamical one, a planet is a planet if it has cleared out itsorbit of rocky litter either by eating up that material, and becoming fatter inthe process, or kicking the junk into other orbits. But that's just asimplistic view. What about Jupiter, which has a slew of captured asteroidsthat orbit the sun in lockstep with the giant planet?

Thegeophysical definition would include as planets objects massive enough for gravityto make them about spherical but not so massive that internal nuclear fusionexists, as is the case with stars.

"You gothrough and look at how the definition [of planet] has evolved over time andthey all have one thing in common. The basic characteristic of a planet is theygo around the sun, historically," Levison said. "This is a dynamicaldefinition. So to say you can't use dynamics, that somehow it's wrong to usedynamics, in order to characterize a planet is historically inaccurate. That'sthe way we've always defined planets."

Mark Sykes,directory of the Planetary Science Institute in Tucson, Ariz., supports ageophysical definition of round objects that orbit a star. The key here is thatonce an object gets that big, important geophysical processes begin. Such anobject is large and round enough that heat can build up in its core to triggergeophysical processes ? akin to volcanicactivity and tectonic movement on Earth ? and a process known asdifferentiation in which the less dense material sinks to the center and thevolatiles float toward the surface.

Thegeophysical definition leaves open the planet window for some satellites,including Jupiter'smajor moons: Io, Europa, Ganymede and Callisto. While Io is the mostvolcanically active body in the solar system, Callisto is the solar system'sthird largest satellite and Europa likely has an iron core, mantle and surfaceocean similar to Earth's structure.

"Theseare massive worlds," said William McKinnon of Washington University inSaint Louis. "They are planets in all but name. They just happen to begoing around Jupiter."

But does itmatter what an object is called, at the end of the day?

"There'san implicit hierarchy. If you're a planet, you are first-class, A-list, you getinside the rope to the club and, otherwise you're nothing," McKinnon said."There's got to be some way to communicate that these are worlds in theirown right, as worthy of study as Mars."