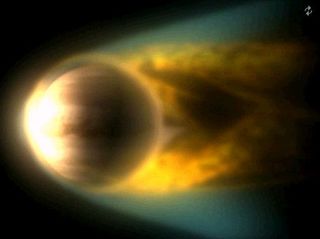 This artist's illustration was originally released by the Venus Express spacecraft team. Wickramasinghe included the image as a figure in his article with the caption, "Evidence of solar wind excavating the atmosphere of Venus." Some scientists have objected to its being labeled as "evidence."
(Image: © ESA/C. Carreau)

Venus, with its boiling-hot surface, doesn't seem a likelyplace to find ET. But a new paper argues not only that Venusian clouds could harbormicrobial life, but also that the life there could potentially hitch a rideaboard the solar wind to Earth. The possibility for microbial life on Venusianclouds has been suggestedbefore, though it's still not widely thought to be likely. However, the assertionthat this life could potentially float from Venus to Earth is novel, andcontentious.

The clouds on Venus are thought to be the planet's best betfor life because the temperatures there are cooler than at the too-hotsurface, and water vapor has been detected in the atmosphere.

"The temperature and pressure there are entirelycongenial to the survival of certain types of microbes," said researcher ChandraWickramasinghe of the Cardiff Centre for Astrobiology at Cardiff University in Wales. "Microbes are known to survive in similar environments on Earth."

In particular, bacteria that have been found in extremeconditions in sulfurous hot springs on Earth would also thrive in the Venusianclouds, he said.

Wickramasinghe, writing with co-author Janaki Wickramasinghein the June 2008 issue of the journal Astrophysics and Space Science,further suggests that these microbes could potentially be transferred fromVenus to Earth by the solar wind, the stream of charged particles that is continuouslyejected from the sun. This stream is known to sometimes carry chargedparticles, called ions, from Venus' upper atmosphere off the planet, though noone has ever suggested it could carry heavier dust particles or microbes.

"We point out that Venus and Earth are very close interms of proximity," Chandra Wickramasinghe told SPACE.com. "Thereare occasions where Venus and Earth are aligned, which would be the bestpossible time for any exchange of material from Venus to Earth."

The last such alignment took place in 2004 and the next willhappen in 2012, he said.

But other scientists are skeptical that the solarwind would be able to carry these particles between the two planets.

First of all, the possibly life-harboring clouds are muchtoo low, said David Grinspoon, an astrobiologist at the University of Arizona who was on the science team for the European Space Agency's Venus Express satellite mission.

"It?s a much higher altitude where the solar wind issweeping ions away from the planet," he said. "There's a hugephysical disconnect between the clouds and the material that's being swept awayby the solar wind."

But Wickramasinghe contends that convection in theatmosphere could be enough to lift these particles to the heights needed to bepicked up by the solar wind.

Another issue is whether the dust particles and microbes, ifthey did manage to be lofted to the upper atmosphere, would be too heavy to becarried away by the solar wind, which has only been observed to lift up lightions.

"Dust particles are orders of magnitude heavier than theseions and there's not enough energy in the solar wind to be knocking them out ofthe atmosphere," Grinspoon said. "I'm skeptical that you could reallyget them up to that height but even if you could you would still need a way toeject them. That?s a whole different ballgame. It's like saying because I'vegot a window open and there's air leaking out, therefore my bed might somehowfly out the window into my backyard."

Janet Luhmann, a geophysicist at the University of California, Berkeley, calculated that the heavy microbes would need vastly more energy toescape Venus' gravity than the ions do, which is probably beyond the capabilityof the solar wind to provide.

"While this idea is interesting, it doesn't look too goodwhen the numbers are applied," she said.

Wickramasinghe maintains that the process is reasonablethough, if the force of the solar wind combines with pressure from the sun'sradiation to pull the particles off Venus.

"I concede that the processes are speculative and needto be discussed more carefully, but the fact remains that if there is microbiallife on Venus, being lifted to high enough altitudes through convective motion,then the transfer is a possibility."

Grinspoon countered that while speculations are fine, it'simportant to back it up with reasonable science.

"It's OK to pursue speculative ideas because we don?twant to be too cozy and safe and assume that we know everything about life inthe universe," he said. "However, we have to be rigorous and carefuland honest and logical and scientifically meticulous when we speculate. Theyhave not done that. When somebody does this and calls it astrobiology, it risksdiscrediting the entire field and associating this necessary speculative edgeof astrobiology with complete pseudoscience."

He took special issue with one figure in Wickramasinghe's paper.The caption reads, "Evidence of solar wind excavating the atmosphere ofVenus."

"Evidence? There's no evidence there, it's just adrawing!" he said. "I can't believe, if this was peer reviewed, that somebodydidn?t point this out."

Indeed, David Brain, a University of California, Berkeley scientist on the Venus Express team who released the image, said it was"definitely an illustration."

"The color picture is a representation of data,"he said. "I wouldn?t call it an artists' depiction. If it was an artist's depiction,it was based on data from the satellite."

While Brain said the image itself wasn't evidence for solarwind excavation of the Venus atmosphere, he did confirm that the Venus Expressmission found ample proof that this process is going on.

"[Wickramasinghe's] paper was fun to read anddemonstrates thinking outside of the box on some big picture science related tolife in the solar system and on Earth," he said. '[The paper's thesis] relieson several assumptions and steps, each of which would need to be individuallyverified before this idea was broadly accepted."