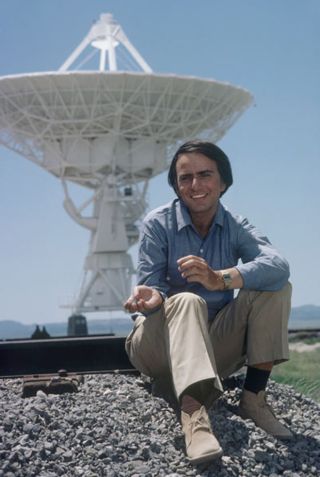 Readerwarning: I'm taking off the kid gloves. If I seem angry here — a state ofemotional discombobulation that seldom seems to be my wont — it's becausepeople whom I barely know, or in some cases haven't even heard of, insist onpropelling me over the precipice.

Ostensibly,the issue is extraterrestrial intelligence. Not whether it exists, but whether thealiens have come to Earth. This idea, often monikered as "the UFO hypothesis," is a belief that's neitherfringe nor uncommon. A 2002 Roper poll found that nearly half of all Americansbelieve that alien craft have visited Earth, and an even larger percentage feelin their heart of hearts that the government is playing dumb about these cosmiccallers.

But that'snot what's causing the bile to marinate my gallbladder. Personally (and asregular readers know), I'm not convinced by the evidence presented so far that aliensare sharing our airspace. But the evidence for the UFO hypothesis isn't thepoint here. Rather, it's the lack of civilized discourse.

For years,anytime I would write an article on these digital pages about the UFO question,I could be sure of quickly accumulating a dozen or so e-mails from offendedreaders. What struck me was that these respondents were less interested intrying to provide good evidence for landed aliens than they were in making brutal,ad hominem attacks on me. Somehow, the fact that I didn't share theirconvictions must mean that I'm an "evil, terrible person." This sortof automatic excoriation seemed to come with the territory. Talking about UFOswas like moonlighting as a metal duck in a shooting gallery.

But somerecent appearances on CNN's "Larry King Live" made clear to me that sheet-steelquackers are an abundant breed. Anyone who publicly doubts that alien spacecraftare sailing our skies risks being a target. On the last of these programs, Iwatched as folks who were there to describe their evidence for extraterrestrialvisitation laid into the guests who were skeptical: Bill Nye(the Science Guy) and me. Several of the UFO proponents made puerile jokesabout Nye's TV career, much of which has been devoted to teaching science tokids (it's hard to think of a more worthwhile endeavor, incidentally). Nye'sresponses were impressively dignified, although that didn't seem to faze thosewho found endless amusement in berating him.

I, too, wasattacked, generally along the lines that, since I don't investigate UFOreports, I'm not qualified to opine on whether I find them convincing or not. Well,that's bunk. And it's certainly not how science works. I don't need to be an astronomerspecializing in black hole research, nor do it myself, to gauge whether someone'sclaim that they've found one of these collapsed objects in the center of somegalaxy or other is credible. I can do that based on the methodology, the reporteddata, and (to be brutally frank) the reputation of the investigator and theirprofessional affiliation. The burden of proof in science is on the personmaking the claim. And if the only way the investigator can convince others is byinsisting that their audience shift careers and start doing their work,then something's gravely amiss. Carl Saganwas asked his opinion about many matters in which he had no researchbackground. His thoughts on same were valuable and worth hearing.

Needless tosay, there were a number of vituperative e-mails awaiting my delectation afterthe "King" shows (and, to be fair, some nice ones, too). One of theloveliest, from the executive director of an advocacy group that hopes to wrestloose UFO secrets supposedly held by the government, included thesewell-wishes:

"While we don't expect you to go away anytime soon,there is one consolation. Everything you have said and written on the subjectof UFO/ET phenomena is archived - audio, video, email, paper. You can beassured that when this issue is finally resolved, post Disclosure, every timeyou open that ill informed mouth of yours, that archive will be brought to bearand you will be eviscerated. You deserve nothing less."

Although Idisagreed with this gentleman's conviction that a massive cover-up has keptalien visitation from our clear notice, I told him that I would not want him "tobe eviscerated, now or in the future." His rejoinder was massively unfriendlyand threatening.

So what'swrong here? Why is it that so many members of the UFO community feel that theyneed to be bullies? Yes, I'll freely admit that many scientists are dismissiveof the UFO hypothesis — often to the point of ridicule. I can understand thefrustration occasioned by that. "I don't get no respect" can be alegitimate plaint, and I'm sure that some UFO proponents feel that pain.

Nonetheless,if after 60 years of claims, the only way that those who believe we're hostingextraterrestrials can make their point is by wielding the blunt weapon ofpersonal attack, then the whole issue has gone off the rails. I'm willing tolisten, and — believe it or not — you could convince me with decent evidence. Afterall, I happen to think that extraterrestrial intelligence is a frequentoccurrence in a universe of ten thousand million million million stars.

But whenyou resort to threats, vitriol and scorn, I think you've lost more than theargument. You've lost your cred.