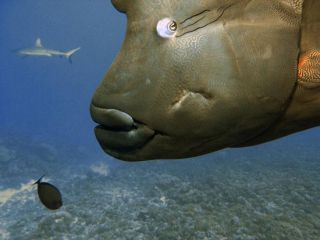 Mark Showalter is an avid scuba diver, and has dived everywhere from Alaska to Australia, the Galapagos Islands, the Red Sea, and throughout the Caribbean and South Pacific.
(Image: © Mark Showalter)

Showalterdirects the Planetary Rings Node ofNASA's Planetary Data System. Anyone looking for information on planetary ringscomes to Showalter's website here at the SETI Institute. Mark manages the ringsnode and continues to pursue his research interests from the ground and inspace.

Whileeveryone knows about Saturn's spectacular ring system, it's often forgotten thatJupiter, Uranus, and Neptune are also encircled by fainter and narrower rings.Each of these systems interacts closely with a family of small, inner moons.Showalter works on some of NASA's highest-profile missions to the outerplanets, including Cassini, now orbiting Saturn, and New Horizons, whichrecently flew past Jupiter en route to its 2015 encounter with Pluto. Known forhis persistence in planetary image analysis, Mark's work on the earlier Voyagermissions led to his discovery of Jupiter's faint, outer "gossamer"rings and Saturn's tinyring-moon, Pan.

Marksplits his observing time between NASA space probes and Earth-based telescopes.He has been a frequent investigator with the Hubble Space Telescope. Since2002, he has been leading a team of astronomers studying the planet Uranus. Hisdiscovery of two small moons — Cupid and Mab — and two additional faint ringsorbiting that distant planet received national attention in 2006.

Onthe ground, Mark observes with the 10-meter Keck Telescope in Hawaii, where thenew adaptive optics system has begun to rival and sometimes surpass Hubblein the clarity of its images. He will soon be turning his attention fartheroutward to Neptune, which is encircled by a peculiar family of rings, moons andincomplete arcs. These were studied by the Voyager spacecraft in 1989, but havebeen observed only a few times since then. Rings and the faint moons thatinteract with them are more than just local anomalies. They serve as dynamiclaboratories where we can observe some of the same processes that operate,albeit on much larger scales, in galaxies and during the formation of planetarysystems.

Thebest part of Mark's job is that he can come to work in the morning not knowingwhat new discovery might be awaiting him in the latest data.

Hewelcomes the opportunity to share this spirit of discovery with interestedindividuals or small groups. Watch over his shoulder as he processes the latestdata and be among the first to see features that have never before beenrevealed to human eyes.

Markisn't just rabid about rings. As an avid scuba diver, amateur naturalist andaward-winning photographer, he spends his vacations exploring the diversity oflife on Earth in its most distant and exotic and underwater environments. Hehas dived everywhere from Alaska to Australia, the Galapagos Islands, the RedSea, and throughout the Caribbean and South Pacific.

Asa different kind of journey of discovery, we invite experienced scuba divers onan expedition to a destination of their choice. Work with Mark to understandmore about environments and life forms as we prepare for the trip, and thencompare notes after each dive. Such a trip would also afford ample "downtime" to explore Mark's other passion, photography, so we can examine thelatest imagesfrom the heavens above when we're not focused on the oceans below.

Anyonecan adopt a SETI Institute scientist and become part of the adventure!

Eachof our scientists offers a compelling journey of discovery. When you adopt ascientist, you help lead the way towards answering profound questions regardingour place in the universe. You can form a one-on-one relationship andparticipate in the process of ground-breaking science with any number of ourinstitute's scientists. In an effort to ensure that this vital researchcontinues to prosper, our Adopt a Scientist Program invites you to make adirect contribution to the field.

Thereare many levels of commitment. For more information on the Adopt a Scientistprogram or to adopt a scientist, visit our website at http://www.seti.org/AdoptAScientist/. Or email Karen Randall at krandall@seti.org or call 650-960-4537.