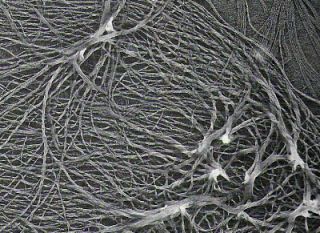 This is a TEM image taken of the water, or inclusion brine, inside the halite crystals. It's easy to see that the brine is full of fibers.
(Image: © Griffith et al.)

Scientistshave long searched for traces of ancient life on Earth in order to understandthe history of life on our planet.

Fossilizedbones have helped us understand the age of the dinosaurs.Insects trapped in drops of amber have inspired Hollywood films and researchersalike. These remnants of ancient life on Earth provide important clues aboutour planet's past.

Now, a teamof researchers working in New Mexico has found traces of life inside saltyhalite crystals. The discovery is "an invaluable resource for understandingthe evolutionary record [of Earth] over a geological time frame,"according to Jack Griffith of the University of North Carolina, Chapel Hill and his colleagues, who recently published their work in the journal Astrobiology.

The findingmay even help scientists search for signs of life onother planets.

Halite ismore commonly known as "rock salt" and can be found all over theplanet in the form of salty crystals. These crystals may not seem all thatinteresting at first glance. However, inside of them are tiny pockets of waterthat can be very valuable for scientists. Halite crystals form in liquid asevaporation occurs. The crystals naturally trap small amounts of liquid duringthis process. These water pockets and all that they contain can be protectedinside halite crystals for extremely long periods of time. The crystals in therecent study had drops of water that were 250 million years old.

The halitecrystals have kept these tiny water drops safe for an astonishing length oftime ? but the story doesn't end there. Scientists discovered abundant amountsof cellulose fibers inside the water. Cellulose is present in many livingcells. One of the most common places to find cellulose is as a component in thecell walls of plants. Cellulose is also produced by single-celled organismslike cyanobacteria.

Mostimportantly for astrobiologists, cellulose is only formed by living organisms.If cellulose is present, there must have been life.

Luckily forthe research team, cellulose is a very sturdy material and the fibers werestable enough to survive until today. Additionally, the samples were collectedfrom deep below the ground, where they had been protected from radiation.The cellulose found in the New Mexico halite is now the oldest biologicalmacromolecules ever isolated. In addition, the researchers were able tovisualize the fibers and study their biochemistry. Because of this, the 250million-year-old cellulose is now providing a window into the history of lifeon Earth.

Ifcellulose can survive for 250 million years inside halite on Earth, it may bepossible for similar molecules to survive in halite crystals on other planets.

Celluloseis a common component in organisms on Earth. According to the authors of thestudy, "over 100 gigatons of cellulose are produced each year" on ourplanet. It is used by bacteria to make biofilms. Plants and algae use celluloseto help build their physical structures. The bodies of insects contain amolecule very similar to cellulose called chitin.

If life onother planets is similar to life on Earth, it is possible that alienorganisms might use molecules similar to cellulose. As this new study shows,these molecules could possibly survive for millions of years, even if theirhome planet is no longer habitable today.

If we canfind halite on other planets, the crystals may be an excellent place to searchfor proof of ancient life. The researchers are hoping to examine even oldersamples of halite on Earth in the future to determine if biomolecules likecellulose can survive even longer inside the crystals. If future studies aresuccessful, halite crystals could become an important target for futureexploration missions to Mars and beyond.