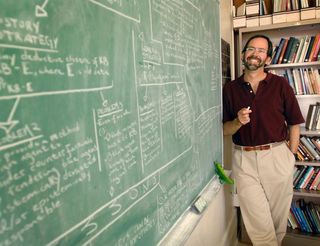 Walkingpast the open door of a writer's workshop that was held this spring at the University of Wyoming in Laramie, much of the conversation was of the sort you might expectfrom any other group of students honing their craft as creative writers. Theypondered which aspects of the human condition are most important to conveythrough their art. They examined their motivations for writing. Andcontinually, they struggled to make themselves understood by readers who may bevery different from themselves. But there is a critical difference from othercreative writing classes. The intended audience for this class — if it existsat all — lives on a planet circling a distant star.

EachWednesday at 2:10 p.m., at the west edge of campus in a spacious, modern, andnondescript room on the first floor of the aptly-named Classroom Building, these young writers began a three-hour session pondering their craft in a course the registrar'soffice listed as "English 5560. Writing for an Extraterrestrial Audience."From the first day of class, students were asked to contemplate what they wouldsay as part of a team responsible for sending a message to intelligent life onother worlds. As if that's not hard enough, "each piece should 'stand alone'for reading and appreciation by a terrestrial audience," said JeffreyLockwood, the instructor of the class.

In lateSeptember 2008, Lockwood will join leading scientists in the search forextraterrestrial intelligence (SETI) for the "Searchingfor Life Signatures" conference, to be held at UNESCO Headquarters in Paris. In his paper scheduled for the session "Historical, Philosophical andSociological Aspects of SETI," Lockwood will suggest that SETI scientistscan learn some serious lessons in interstellarmessage composition by examining the work of his students.

For theirfirst in-class assignment, each student wrote a brief "letter to ET."Some messages were similar in spirit to the pictures of a man and woman engravedinto the metal plaques borne by two Pioneer spacecraft that now drift aimlesslythrough interstellar space. Christine Ingoglia, a graduate student who enteredthe university's Master of Fine Arts (MFA) program in creative writing in theFall of 2007, started with a basic description of our appearance: "We looklike — two arms, two legs, head, torso, symmetrical." Similarly, fellowMFA student Meagan Ciesla's summary — "We need food, air, water, and thinkwe're the most intelligent" — was reminiscent of a message transmittedfrom the Areciboradio telescope in 1974, which described the chemical basis of life onEarth, and showed a picture of only one terrestrial species: Homo sapiens.

As JeffreyLockwood was completing his Ph.D. in entomology at Louisiana State University in 1985, there was little to predict he would today be trying to express thehuman condition to aliens. After completing a dissertation on the behavioralecology of Nezara viridula, more commonly known as the southern greenstink bug, he joined the University of Wyoming's Department of RenewableResources as an entomologist. Two decades later, Lockwood is Professor ofNatural Sciences and Humanities, and he teaches in both the Department ofPhilosophy and the MFA Program in Creative Writing.

Many ofLockwood's writings betray his background as an entomologist even by theirtitles, such as his recent book Locust: The Devastating Rise and MysteriousDisappearance of the Insect That Shaped the American Frontier. Other works,such as his book Grasshopper Dreaming: Reflections on Killing and Loving,suggest his scholarly concerns are broader than those of many scientists. Andso, on the days this past spring when he was not encouraging students to pondercelestial audiences, he could be found teaching a philosophy course inecofeminism, looking for new approaches to environmental ethics.

One isreminded constantly that this campus in a town with a population of 27,000 — abouthalf of them students — is in a large state with a sparse population. One nativeWyomingstudent in this writer's workshop, for example, attended high school in aone-room schoolhouse located a hundred miles from the nearest town. There wereonly two other students in that rural schoolhouse: her siblings.

Anothermember of the class, running a few minutes behind schedule on the day of myvisit, explained that the battery on her tractor was dead that morning. Sheapologized, saying it took her longer than usual that day to feed her buffalobefore coming to campus.

It seemsonly fitting, then, that this university with the motto "New Thinking,"located a two-hour drive from the nearest large city, provided the weeklygathering place for a dozen inquisitive students and one innovative instructorto ponder whether the vast expanses of space beyond Earth could also provide a homefor creative writers, and if so, what we should tell them in our first messages.