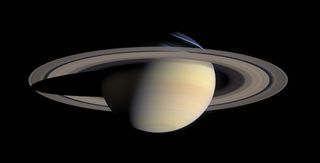 The most detailed image ever made of Saturn and its rings was sent by the Cassini spacecraft on October 6, 2004.
(Image: © NASA/JPL/Space Science Institute)

Saturn?srings and moons turned out wilder than any scientist could have imagined, butunknowns remain as the Cassini spacecraft concludes its primary mission and embarkson a new one.

?One of thegreatest surprises about Cassini's science results is that some of the mostextreme predictions have turned out to be correct,? said Bob Pappalardo, ageologist at NASA's Jet Propulsion Laboratory in Pasadena, Calif., who recentlysigned on as Cassini project scientist.

Pappalardoand other scientists look forward to Saturn serving up even more surprisesduring the extended, two-year Cassini tour that began June 30 — and perhapssome answers as well.

The rings ofSaturn got a true close-up when Cassini arrived. The rings appear less likeorderly lanes of traffic and more like highways from hell, with moonlets the size offootball stadiums plowing through the frozen debris or pulling off streamsof the stuff with their gravitational pull.

Thediscovery of the moonlets suggested that Saturn?s rings are the remnants of amoon shattered by collision with a comet or asteroid.

Cassini similarlywitnessed several electrical storms, including long-lived one that firstappeared in late 2007. That monsterstorm produced lightning 10,000 times more powerful than any seen on Earth,spanning thousands of miles.

Thespacecraft dropped its Huygens probe into Titan?s clouds and discoveredEarth-like weather and environmental effects there in early 2005, but combinedwith completely different chemical building blocks. Methane and ethane raindown instead of water to form lakes and rivers. A hidden ocean also apparentlylurks beneath the moon?s crust.

Morerecently, Cassini flew in March 2008 through an icy geyser emanating from themoon Enceladus and sniffedout organic molecules such as carbon dioxide and methane. That suggests themoon may contain conditions for life, although scientists have yet to confirmliquid water.

Pappalardodescribed Enceladus as ?a tiny moon that?s incredibly active? despite its relativelysmall size, equal to that of Arizona. Saturn?s gravitational influence flexesthe moon and produces tidal heating that may allow for a liquid ocean beneaththe surface of Enceladus, although scientists still debate this.

?Seems like an ocean should freeze up pretty quickly,?Pappalardo said, adding that tidal heating and impurities within the oceanmight keep it liquid. ?It?s a great mystery, and it?s teaching us about how icysatellites work.?

The extendedCassini tour will include more visits to Titan and Enceladus, and not onlybecause Cassini uses Titan for gravitational boosts during flybys. Both moonsseem to suggest the possibility of life in the outer solar system, along withJupiter?s moon Europa.

Scientistsalso have their eyes set on the upcoming Saturn equinox in August 2009, whenthe sun ?sets? on the ring and passes through the ring plane. That event allowsfor an unprecedented view of the overall ring.

?We can lookfor subtle warping of the ring, thermal effects and shadow effects,? Pappalardosaid. ?It may not be a perfectly flat disk.?

Cassini?sextended mission also could resolve a longstanding mystery about pinning downthe exact length of Saturn?sday. The measurement of Saturn?s rotation is based on the rotation of theplanet?s magnetic field, but that magnetic rotation rate has changed betweenthe time of the Voyager encounters with Saturn in the 1980s and Cassini?sarrival in 2004.

Pappalardocompared Cassini to a ship floating in Saturn?s magnetic field ocean — ametaphor that could also apply to the ongoing Cassini mission as it continuesto plumb Saturn?s secrets.

??Slowlyover time, you cross the ocean at different times and days and seasons,?Pappalardo said. ?Eventually you start to get a picture of what goes on.?