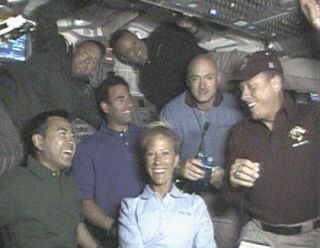 The STS-124 crew members aboard space shuttle Discovery participate in an interview with reporters on the ground on June 1, 2008 as they prepare for the next day's arrival at the ISS.
(Image: © NASA TV)

Discoverylaunched Saturday with the first external fuel tank built from scratch withall the changes planned after the 2003 Columbia disaster. The new tank wasdesigned to release as little falling debris as possible during launch, sincefalling foam from the external tank on Columbia damaged that orbiter?ssensitive heat shield and led to its demise.

?We worked very hard on the modifications that were inplace,? LeRoy Cain, STS-124?s mission management team chair, said in a briefinghere at Johnson Space Center on Sunday. ?We feel very good about theperformance of the tank.?

The seven STS-124crewmembers completed a preliminary scan of their vehicle?s heat tiling in somesensitive areas, such as the leading edges of its wings. The inspection hasn?tturned up any major problem areas so far, but the data still need to beanalyzed in detail.

"It was just a quick inspection, as much as we could with what we have," said mission specialist Karen Nyberg during a televised interview today.

The results of the survey, in combination withobservations and photos of Discovery?s external tank and orbiter during launch,indicate that the new design of the tank has been successful.

?We do have a couple areas where we lost some foam, andwe?re still doing some analysis,? Cain said. ?There are some areas that we willbe looking at, but in a broader sense the tank absolutely performed in amagnificent fashion.?

About five pieces of foam debris were seento fall from the external tank during Discovery?s launch. Mission managers saythey don?t think these were likely to have damaged the orbiter because theyappeared to be lightweight and they fell relatively late during the liftoff, sothey wouldn?t have built up enough velocity to pose a great threat.

?We don?t consider those a big deal to us,? Bill Gerstenmaier,NASA's space operations chief, said Saturday after the liftoff.

Today?s heat shield scan was only a cursory one, becausethe laser tool usually used for the inspection following launch was not aboardthe shuttle. Discovery?s sensor-tipped boom is waiting for it on the spacestation, because the shuttle didn?t have room to carry the long pole in itspayload bay, which was almost completely filled by the massiveKibo lab.

?The inspection went absolutely wonderfully,? MattAbbott, lead flight director at NASA, said Sunday. ?We got exactly what we wereexpecting to get.?

The crew will perform a more exhaustive scan on Friday afterthey have reclaimed their sensor-tipped boom. This detailed inspection willmake sure Discovery hasn?t suffered damage that could harm it during itsdescent back to Earth.

The astronauts will spend the rest of the day preparing todock with the space station, which is planned for tomorrow at 1:54 p.m. EDT(1754 GMT).