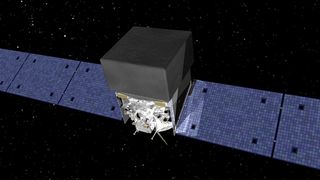 An artist's interpretation of the GLAST gamma ray observatory in orbit.
(Image: © NASA.)

The newlaunch target was selected to ?give the launch team sufficient time to makesure remaining open engineering issues are resolved,? NASA officials said in aThursday announcement.

The $690million GLAST observatory is designed to map the night sky in the gamma rayrange, beyond the limits of human eyesight, to hunt the most energetic objectsand form of light in the universe. Researchers hope the new telescope willanswer long-standing questions over astronomical oddities like dark matter andsupermassive black holes, as well as spot gamma ray bursts - the mostpowerful explosions in the universe - and trace the source of cosmic rays.

GLAST has a nearly two-hour window to launch on Thursday andwould follow NASA?s spaceshuttle Discovery, which is poised to blast off Saturday afternoon from thenearby Kennedy Space Center to delivera new Japanese lab to the International Space Station.

GLAST?stwo-day launch slip is the second delay for the space telescope, which wasoriginally slated to launch May 16 before Delta 2 booster issues cropped up.