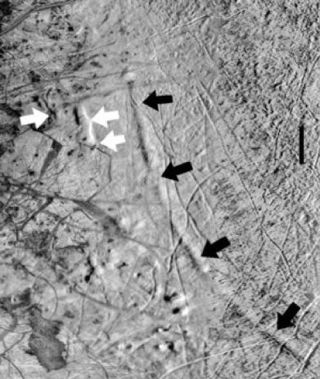 ?A spinningbody is most stable with its mass farthest from its spin axis,? said Isamu Matsuyama,planetary scientist at the Carnegie Institution who participated in the study.?On Europa, variations in the thickness of its outer shell caused a massimbalance, so the rotation axis reoriented to a new stable state.?

Theresearch is detailed in the May 15 issue of the journal Nature.

The newfinding adds more weight to the notion that Europa's icy crust slides over aliquid, subsurface ocean which could harbor conditions for life. A similarpossibility exists on Saturn'smoon Titan, leading NASA and Europe to consider futuredeep space missions to one or both places.

"Thelarge reorientation on Europa required to explain the circular depressionsimplies that its outer ice shell is decoupled from the core by a liquid layer,?Matsuyama said. ?Therefore, our studyprovides an independent test for the presence of an interior liquid layer.?