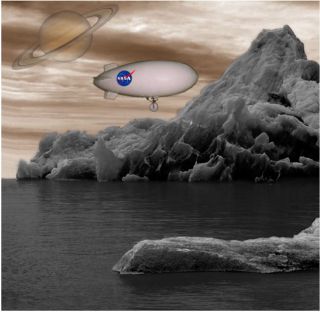 Future exploration of Titan, a moon of Saturn, could be done by blimp. Taking to the air above the enigmatic moon would help determine if Titan is an abode for life.
(Image: © JPL)

BOULDER,Colo. - Scientific and technical teams from NASA and the European Space Agency(ESA) are fleshing out ideas for the next mission to fly to an outer planet -either to Jupiter or Saturn. A decision on which of those two exploration targetswill be the destination for the space agency?s next multibillion-dollarflagship mission is expected by year?s end.

?We havethe outer planet flagship mission in the [NASA] budget ? I do believe it willhappen,? said Fran Bagenal, a professor of astrophysical and planetary sciencesat the Laboratory for Atmospheric and Space Physics at the University ofColorado, Boulder. ?I couldn?t have said that four years ago ? now I have greatconfidence that this will happen.?

Bagenal ischair of the Outer Planets Assessment Group (OPAG), which was established byNASA in late 2004 to identify scientific priorities and pathways forexploration in the outersolar system.

In 2007,NASA completed a series of studies for flagship missions, honing down the listto the two candidate missions that now are under further study by both NASA andESA.

During atwo-day OPAG meeting in late March, officials provided a status report on thetwo outer planet exploration concepts now on the table: a Europa-Jupiter SystemMission and a Titan-Saturn System Mission. Each of those mission scenarios hasmultiple components with both ESA and NASA contributing to whichever outerplanet investigation is down-selected.

TheEuropa-Jupiter mission involves two orbiters with instruments designed tooperate in the severe radiation environment of Jupiter. In addition to ESA andNASA, Russia also has expressed interest in the mission, proposing a Europalander.

?We are nolonger doing studies ? we are now getting ready for a mission,? said CurtNiebur, program officer for outer planets research at NASA headquarters inWashington. Money to push forward on an outer planets flagship, he said, is containedin NASA?s 2009 budget - with ESA conducting a down-select process through itsCosmic Vision process.

?There arebetween one and five different spacecraft elements that comprise thesemissions,? Niebur noted, along with potential contributions from the JapanAerospace Exploration Agency, as well Russia?s Federal Space Agency.

NASA andESA will both down-select to one outer planet mission this fall, Nieburexplained. The mission to the outer planet would be launched via an Atlas 5, aDelta 4 Heavy or an Ares V no later than 2017. The launch would bedesigned to send the spacecraft on a lengthy cruise toward its destination butone that would be no longer than seven years.

At present,there is enough plutonium-238 dioxide allocated for 800 watts of power for anouter planet flagship mission - although due to the shortfallof the nuclear fuel, ?we?ve encouraged studies this year to look at reducedpower requirements to save some of that plutonium,? Dudzinski advised the OPAGattendees.

NASA andESA also are planning to issue a joint Announcement of Opportunity forscientific experiments to fly on the mission. The first of three NASA-hosted OuterPlanet Flagship Mission Instrument Workshops is to be held June 3-5 inPasadena, Calif., Niebur said.

?Whether ornot it?s Europa or Titan as the major target isn?t at all clear,? Bagenal said.Two large science definition teams are working hard to make these missionshappen, she said.

Bagenalemphasized that by careful, early study of these missions it is hoped that anycost overrun can be short-circuited.

?There?s nopoint in having an outer planet flagship mission that ends up costing somuch that we can?t afford to go to another target in the outer solar system foranother 15 years or 20 years,? Bagenal pointed out. ?So we really have thepressure on us to make sure that we can do something that is technically andfiscally responsible.?

Whatever outerplanet target is chosen - likely to occur this November - getting to thatlocale is tough, Bagenal told SPACE.com, be it taking a payload to thesurface of Titan or going into orbit around Europa.

?Thetechnologies are being worked ? they are being lined up,? Bagenal said.

?It?s justan issue of can you be clever and squeeze things down and do things veryefficiently to save money. And it?s money, money, money,? Bagenal said. ?Allthese studies are being done to make sure we?re going in carefully ? with oureyes wide open.?