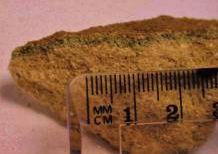 Chroococcidiopsis, which was used in this study, is shown here living in a rock from the Negev Desert in Israel. The green line running across the top of the rock is a thin endolithic film formed by the organism. These microbes live just below the surface of the rock, protected from the Sun's UV radiation.
(Image: © Gerda Horneck)

Manyscientists believe that a massive rock from space camecrashing down 65 million years ago at the end of the Cretaceous Period. Theresulting blast set forests ablaze. The skies of Earth were filled with ashthat blocked out the sun, and the planet went cold. Vegetation died in theabsence of sunlight. Shortly thereafter, the dinosaurs and many other life formson Earth went extinct. Millions of years of evolution were wiped clean in aninstant.

It'sfrightening that one instantaneous event could completely change the face oflife on Earth. However, a new study supports longstanding suggestions that asteroidimpacts could also help spread life throughout the universe.

Rocksthat are ejected from the Earth — or any other life-bearing planet — by anasteroid impact might actually protect microbes living inside them while theyfloat through space. These rocks could then fall to the surface of otherplanets, or even back to their planet of origin.

Inthis way, the microbes could return to their home planet and"re-colonize" the surface after the disastrous effects of theasteroid impact have worn off.

Inorder for organisms to survive a trip into orbit, they must endure a series oflife-threatening events.

Firstthere's the asteroid impact itself. Then there's the force of being launchedinto space. Next, they must travel in the harsh environment of spaceuntil a planet's gravity reels them in. This means facing an environment ofextreme cold, intense radiationand vacuum exposure. Finally, they need to fall down through the atmosphere,experiencing extreme pressure, heating and the shock of landing.

Previousstudies have shown that some rock-inhabiting organisms, known as "endoliths,"might be able to survive a trip through space and a plunge through a planet'satmosphere to the surface. However, nobody knew whether these organisms couldsurvive the initial trip into space.

Recently,an international team of researchers, led by Gerda Horneck of the Institute of Aerospace Medicine in K?ln, Germany, selected a number ofhardy microbes from Earth and tested their ability to hitchhike aboard rockssimilar to martian meteorites.

Theorganisms used in the study included bacterial endospores, endolithiccyanobacteria and lichens. This selection provided a wider range of organismsthan in other studies performed to date, including not just simple bacteria butalso more complex eukaryotic organisms.

Theresearchers looked at previous studies of martianmeteorites that provided information about the kinds of forces needed toeject rocks from a large planet. Using this data, the researchers developed aseries of tests designed to simulate these pressures on the selected organisms.

The research is detailed in the Spring 2008 issue of the journalAstrobiology.