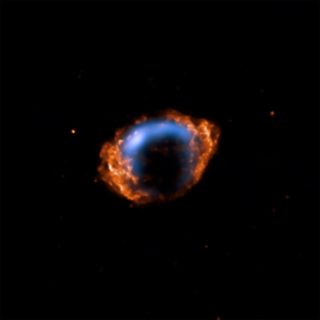 The remnant known as G1.9+0.3 (shown here) came from the most recent supernova in our galaxy. To determine the age of the stellar explosion, astronomers tracked how quickly the remnant was expanding, by comparing a radio image from 1985 (blue) to an X-ray image taken in 2007 (orange).
(Image: © X-ray (NASA/CXC/NCSU/S.Reynolds et al.); Radio (NSF/NRAO/VLA/Cambridge/D.Green et al.))

About 140 years ago, our time, a stellar explosion lit up our galaxy with a blinding flash of light, sending out powerful shock waves to boot. Now, astronomers have spotted the youthful remains from the explosion.

The newly discovered remains mark the youngest known supernova remnant in the Milky Way, snagging the record from the previous holder, 330-year-old Cassiopeia A.

Ever since Cass-A was discovered in the 1950s, astronomers had been searching for "missing supernovae" and their remnants. At around the same time of the Cass-A discovery, astronomers also realized two or three supernovae should light up the Milky Way every century, resulting in about 60 supernova remnants younger than 2,000 years old. To date, just 10 such remnants have been confirmed.

And so G1.9+0.3, the new remnant detailed in the June 10 issue of the Astrophysical Journal Letters, is the prize from the astronomers' 50-year galactic hunt.

Supernovae are considered some of the most violent events in the universe. They are massive stars at the end of their lives, exploding with such force that they generate a flash of radiation and shock waves akin to a sonic boom.

Debris thrown outward by the explosion sometimes crashes into surrounding material, resulting in a supernova remnant. This shell of hot gas and high-energy particles glows as X-rays, radio waves and other wavelengths of radiation for thousands of years.

Supernovae and their remnants are critical for creating and distributing the majority of the elements in the universe through the interstellar medium, spreading everything from cobalt to gold to radium to planets, plants, people and far beyond.

By comparing X-ray and radio images from 1985 and 2007, which show the supernova remnant is expanding, the astronomers estimated G1.9+0.3's age. A new VLA image taken this year confirms the age and expansion rate of 35 million mph (56 million kph), which is an unprecedented expansion speed for a supernova remnant.

However, the bright burst would have been invisible to celestial enthusiasts with only optical telescopes at the time, due to a veil of interstellar gas and dust.

"If not for all the interstellar 'gunk' between us and this object, people would have seen this supernova as a new star in the constellation Sagittarius in the years around 1870 to 1900," said lead researcher Stephen Reynolds, an astrophysicist at North Carolina State University.

G1.9+0.3 most probably originated from a Type Ia supernova, the researchers say, in which a white dwarf star siphons hydrogen from a companion star and thus bulks up its mass. When the white dwarf reaches a weight that's 1.4 times more massive than the sun, the star explodes.