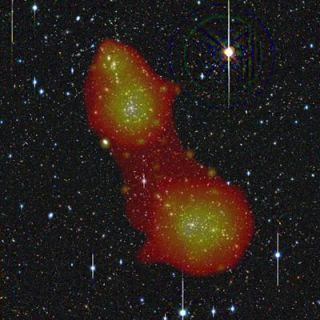 Astronomershave found a piece of the universe's puzzle that's been missing for awhile: atype of extremely hot, dense matter that is all but invisible to us.

Engaging insomething like cosmic accounting, astronomers have tried to balance the scantamount of matter that has been directly observed with the vast amount that remainsunobserved directly. The latter constitutes about 90 percent of the universe's matter.

Galaxies,the stars within them, the planet we live on and the chairs we sit on are madeup of normal matter ? the protons, electrons and neutrons that are collectivelycalled baryons. Baryonic matter can be seen and directly observed, but it makesup only about 4 percent of the universe.

The rest ofthe universe is split up between darkmatter (about 21 percent), a mysterious type of matter that has yet to beidentified but that is thought to have played a critical role in the developmentof the first galaxies that formed after the Big Bang, and the even moremysterious dark energy (about 75 percent of the universe), which causes theaccelerated expansion of the universe.

Dark matterremains a total mystery. But the new study squares the balance sheet a bit inregards to baryonic matter.

Previously,only about half of the baryonic matter in the universe was accounted for by theknown gas, stars and galaxies. A team of astrophysicists has now found evidenceof part of the missing half in a bridge-like filament connecting two clustersof galaxies. The finding is detailed in the May 2008 issue of the journal Astronomyand Astrophysics Letters.

Alongwith dark matter, the missing baryonic matter is thought to form an enormousspider web of tendrils that connect galaxy clusters, which sit on threadsand knots in the web.

The missingpart of this matter was thought to be a hot, ultra-thin gas haze of very lowdensity between larger structures. Its hellacious temperature means that itonly emits far-ultraviolet and X-ray radiation.

Some ofthis missing matter was found by the astrophysicists, who hail from the MaxPlanck Institute for extraterrestrial Physics (MPE) and the European Southern Observatoryin Germany, as well as the SRON Netherlands Institute for Space Research. Theteam used the XMM-Newton, an X-ray space observatory, to observe a filamentconnecting two clusters of galaxies, Abell 222 and Abell 223.

"Sofar we could only see the clusters, the dense knots of the web. Now we arestarting to see the connecting wires of the immense cosmic spider web,"said MPE study team member Aurora Simionescu of the discovery of this missingbaryonic matter.

A similar baryonichaze, 150 times hotter than the sun's surface, was indirectlydetected surrounding the Milky Way and connecting about three dozen othergalaxies known collectively as the Local Group in 2003 by astronomers at Harvardand Ohio State Universities.

It isthought that these hot intergalactic hazes were created from material that didnot fall into galaxies when they first formed more than 13 billion years ago.Finding and analyzing these filaments could help astronomers better understandwhat happened after the Big Bang and what forces are dominating the universetoday.