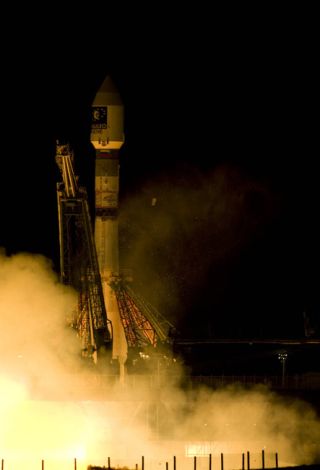 Europe's Galileospace-based navigation system took another step toward fruition with the launchof a second prototype satellite Saturday night, less than a week after theEuropean Parliament approved plans to finance the network with public funds.

The second Galileo In-OrbitValidation Element, or GIOVE, satellite will test flight hardware for engineersdeveloping the system's operational constellation for launches beginning in2010.

GIOVE B rode into orbit ona Soyuz rocket topped with a Fregat upper stage. Liftoff of the four-stagerocket was at 2216 GMT (6:16 p.m. EDT), or in the predawn hours of Sunday atthe Baikonur Cosmodrome launch site.

The Soyuz flew into astar-filled night sky, shedding its four liquid-fueled boosters and two corestages during the first eight minutes of flight. Fueled by storablepropellants, the Fregat fired its engine for about 20 seconds to park the stageand the GIOVE B payload in a temporary low-altitude orbit at about 2226 GMT(6:26 p.m. EDT).

Two more Fregat enginefirings are on tap during the next few hours to guide GIOVE B to a circular14,429-mile-high orbit with an inclination of 56 degrees.

Separation of the1,104-pound satellite from the Fregat upper stage is scheduled for 0201 GMTSunday (10:01 p.m. EDT Saturday), followed by deployment of the spacecraft'stwo solar panels about 30 minutes later.

"We are all lookingforward to a successful trajectory of this Soyuz and Fregat, and we arepreparing actually for the real operations that will start only a few hoursfrom now," said Javier Benedicto, the European Space Agency's Galileoprogram manager.

The GIOVE B satellitelaunched Saturday will pave the way for the 2010 launch of the first fourmembers of Galileo'soperational fleet. Subsequent launches through the end of 2013 will fillout the final constellation, which will consist of 27 active satellites andthree spacecraft in reserve.

The satellites will bespread among three orbital planes inclined 56 degrees to the equator. Thedesign will ensure full coverage of Europe and nearly all of the world'spopulation.

The system will provide afree service open to all users, plus additional encrypted channels forcommercial and government customers.

The European Parliamentvoted Wednesday to overwhelmingly approve the new plan, which will costEuropean taxpayers more than $5 billion through 2013. The vote was one of thefinal obstacles standing in the way of full-scale development of the Galileosystem.

But first engineers mustuse GIOVE B and a precursor satellite launched in 2005 to demonstrate thenavigation payload before the instruments are launched aboard operationalGalileo spacecraft.

European officials selectedcompeting contractors for the two testbed satellites. U.K.-based SurreySatellite Technology Ltd. was the lead contractor for theGIOVE A satellite, and a team of EADS Astrium, Thales Alenia Space andTelespazio won the spacecraft, payload and operations contracts for GIOVE B.

Now operating nearly fourmonths beyond its two-year design lifetime, GIOVE A has transmitted Galileonavigation signals in two channels since early 2006 to preserve European rightsto radio frequencies planned for use by Galileo. GIOVE B will improve thatcapability to three channels and maintain European access to Galileofrequencies until operational satellites begin launching in 2010.

GIOVE B carries the mostaccurate clock ever flown in space, using the predictable activity of hydrogenatoms to keep time a billion times more accurately than a digital wristwatch.Galileo satellites need to know the exact time to provide correct position datato users.

The hydrogen maser clockwill keep time within one nanosecond per day, or about one second every 2.7million years, according to ESA.

The launch of GIOVE B waspostponed nearly two years due to a serious technical glitch that occurredduring ground testing, damaging the satellite's computer. The mission waspushed back again from December because Soyuz rocket parts were not available,according to ESA officials.

The delays forced ESA tosign a contract in March 2007 with SSTL, the builder of GIOVE A, to manufacturea nearly identical spacecraft to fill a potential operations void between thetwo previously planned Galileo demonstration satellites.

Named GIOVE A2, thereplacement satellite was primarily a backup in case GIOVE B was delayedfurther or suffered a launch failure. ESA's future plans for the satellite areunclear, and attempts to reach agency officials on the matter wereunsuccessful.

Engineers used the extratime to install equipment on GIOVE B to transmit a collaborative signal to beemployed by the Galileo program and the future U.S. GPS 3A satellite system.The craft will test the signal - called MBOC - to make sure it works as expected.

The U.S. GPS constellationis the only satellite navigation system currently available worldwide. Russia'sGlonass network, now only covering domestic users, could be restored to globalservice by the end of next year, according to Russian officials.