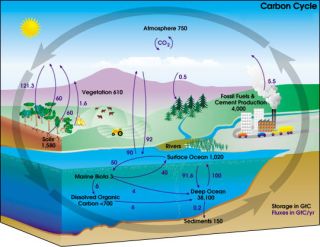 The carbon cycle is one of the most important biogeochemical cycles on Earth. In any given year, tens of billions of tons of carbon move between the atmosphere, hydrosphere, and geosphere. The illustration above shows total amounts of stored carbon in black, and annual carbon fluxes in purple.
(Image: © NASA/NASA Earth Science Enterprise)

The debateover climate change and its effects is often headline news. In the near future,scientists are concerned that the Earth will experience a continuing increasein global temperature. New research is showing that even if this increase isonly a few degrees, it could have important repercussions for life on ourplanet.

Scientists from the Open University in the United Kingdom are studying climate change throughout Earth's history. Their results indicate how dangerous modern global climate change might be for the futureof life on Earth. In a study published in the March issue of Geology, Christopher Pearce and colleagues examined layers of sedimentary rocks from the ocean floor in order to unravel the story of climate change during the early Jurassicperiod.

During theJurassic, abrupt global warming of between 9 and 18 Fahrenheit (5 and 10degrees Celsius) was associated with severe environmental change. Manyorganisms went extinct and the global carbon cycle was thrown off balance. Oneof the most intriguing effects was that the oxygen content of the oceansbecame drastically reduced, and this caused many marine species to die off.

Theseintervals of reduced oxygen content in the oceans are now known as oceanicanoxic events, or OAEs. OAEs are associated with periods of global warming andhave occurred a few times in Earth's history. In the recent study, researchersfocused specifically on the Toarcian OAE, a well-documented OAE from the earlyJurassic.

DuringOAEs, the remains of dead organisms and other organic matter accumulate on the oceanfloor and became layers of organic-rich sediments.Today, scientists are examining the chemical and isotopic compositions of thesesedimentary deposits in order to determine the actual extent to which theoceans became anoxic. By doing so, they have been able to draw connectionsbetween oxygen-depleted oceans and the disruption of Earth's carboncycle.

The carboncycle on Earth is one of the most important cycles for life as we know it.Carbon is a primary building block of life and is present in every livingorganism. In order for life to survive on our planet, carbon must cycle betweenthe atmosphere, geosphere (land), hydrosphere (water) and biosphere (life). Ifthe carbon cycle were to suddenly become disrupted, many forms of life on Earthwould not survive. Even minor disruptions in the carbon cycle can have profoundconsequences for living organisms.

By studyingorganic-rich marine deposits from the Toarcian OAE, the Open Universityresearchers were able to compare the oxygen levels of ancient seawater to theoceans of today. The sedimentary rocks contain molybdenum, whose isotopiccomposition is altered depending on how oxygenated the seawater was when thesediments formed. By studying how the isotopic composition of molybdenumchanged during the Toarcian OAE, scientists have developed a unique way totrace fluctuations in the oxygen content of Earth's oceans.

The OpenUniversity team determined that major disruptions in the global carbon cycleduring the Jurassic period were intimately linked with the development ofanoxic oceans and with global warming. Ultimately, this ties global warming tothe demiseof numerous life forms on Earth millions of years ago. Additionally, theresearch is providing insight into how the Earth's oceans and atmosphere evolvedover time.

Modernstudies of global climate change on Earth usually rely on computer modelingtechniques. However, studying the history of our planet through geology canprovide information on actual occurrences of climate change in the past.

Dr. AnthonyCohen, a member of the research team, commented: "The use of current computermodels to try to predict the course of climate and environmental conditions in thelonger term is uncertain because of our relatively poor understanding of thegreat complexity of the Earth's behaviour. ?In contrast, marine sedimentaryrecords can provide quantifiable information about precisely how the Earth hasresponded to severe environmental change in the past. Therefore, these recordsmay also provide valuable constraints for testing the reliability ofpredictions about environmental change that will continue to occur in thefuture as a result of man's activities."

Althoughthe Toarcian OAE occurred roughly 183 million years ago, the findings of therecent study have important implications for our understanding of climatechange today. The rates and magnitude of environmental change during ancientOAEs appear to have been similar to what we see occurring in modern times.

By studyingOAEs, scientists are able to gain important clues about how climate changemight impact life on Earth in the in the coming centuries. Hopefully, theirwork will lead to scientific solutions that could prevent the same devastatingaffects on the Earth's carbon cycle — and life itself — that were caused byglobal warming during the Jurassic period.