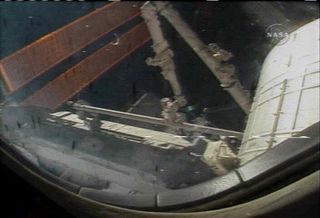 STS-123 astronauts on the flight deck of the shuttle Endeavour recorded this view as the orbiter's inspection boom was attached to the ISS exterior in a March 22, 2008 spacewalk.
(Image: © NASA TV.)

HOUSTON -Two astronauts floated outside the International Space Station (ISS) Saturdayon a record fifth spacewalk for their mission, this one aimed at transferring ashuttle inspection boom to the orbiting lab?s exterior.

SpacewalkersRobert Behnken and Mike Foreman used their spacesuit-clad hands to snatch theshuttle Endeavour?s 50-foot (15-meter) sensor-tipped boom from the tip of arobotic arm and attach it to the station for a later orbiter flight.

?You?re agladiator,? astronaut Rick Linnehan, who choreographed the spacewalk, told Foreman from inside Endeavour after playing a clip from the film "Gladiator" during the six-hour,two-minute excursion.

Thespacewalkers worked in concert with robotics operators inside Endeavour and theISS to move the shuttle?s heat shield-scanning boom between the crane-likeappendages of the orbiter, station and the flesh-and-blood arms of theastronauts themselves.

Endeavourastronauts used the laser and camera-tipped inspection boom to scan theirshuttle?s heat shield just after launch, thenagain on Friday, for damage during their planned 16-day spaceflight.

NASA haslaunched the 50-foot (15-meter) booms on every shuttle flight since the 2003Columbia accident to ensure orbiters are safe to land.

ButEndeavour?s sister ship Discovery can?t carry the tool when it launches May 25because its cargo, Japan?s massiveKibo laboratory module, fills up the entire payload bay. So that shuttle?screw will use Endeavour?s once they arrive at the space station, missionmanagers said.

Behnken andForeman attached a vital power cable to the inspection boom to keep itsdelicate sensors warm during the two months before Discovery?s launch.

They begantheir spacewalk - the fifth and last planned for their record12-day stay at thespace station - nearly an hour early at 4:34 p.m. EDT (2034 GMT). The excursionmarked the most ever for a visiting shuttle crew at the space station, thoughastronauts have performed five spacewalks on service calls to the Hubble SpaceTelescope.

WithEndeavour?s boom tucked into its new perch, Foreman went on to inspect anailing solar array joint on the station?s starboard side.

Themassive, 10-foot (3-meter) wide joint is designed to rotate the station?sstarboard solar wings like a paddlewheel to track the sun and maximize powerproduction. But astronauts discovered metal shavings and damage in the jointlast October, and have surveyed it several times during spacewalks to identifythe source.

Foremantook a close look at an apparent ding discovered during an earlierinspection.

?I feellike this is a divot,? Foreman said, as he passed a wipe cloth over the area.?I feel a little roughness as I rub it over there, it doesn?t feel like aprotrusion.?

Foremanphotographed the divot, as well as the views under several under protectivecovers along the joint.

?You?redoing great with that camera, Mike,? said ISS flight engineer Garrett Reismanfrom inside the station. ?We?re going to hire you to do my cousin?s barmitzvah."

ISS flightdirector Dana Weigel said Foreman?s inspection found no sign of any debrisstrike the joint?s protective covers, which will allow engineers on Earth tonarrow their search for the damage source and come up with repair options, ifrequired.

?The firstdecision point is going to be the end of March,? Weigel said after thespacewalk, adding that the joint can be moved intermittently for the timebeing. ?Our current predictions show that we?re good for the next couple offlights.?

While Foremantackled the joint inspection, Behnken used a hammer to force a stubbornmaterials exposure experiment in place outside the station?s European-builtColumbus laboratory. Mission Control applauded his efforts and suggested hisnickname be switched from ?Bam Bam? to ?Thor.?

Saturday?sexcursion marked the 109th spacewalk outside the ISS and the third careeroutings for both Behnken and Foreman.

Endeavouris slated to undock from the station late Monday and return to Earth Wednesdayevening.